A selection of M5s, including a previous evo feature car, are coming up for sale this June 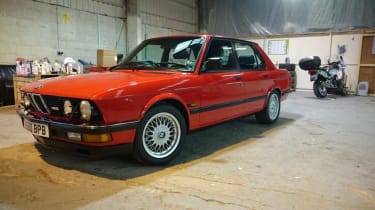 Seven examples of the BMW M5 will go under the hammer at the upcoming Classic Car Auctions’ sale on June 6th.

Celebrating its 30th anniversary this year – and marked by the high-performance 30 Jahre edition of the current-generation car – interest in M5s has never been higher. Several generations of the model will cross the block at the auction in June.

Condition is more important than mileage in this instance, and a fresh MoT certificate should go some way to putting the eventual buyer’s mind at ease.

As should the words of Henry Catchpole who drove the car at the time: ‘[It] still revs amazingly sweetly past 6000rpm,’ he wrote, ‘and, as you’d expect, pulls hardest towards the top end. The soundtrack morphs from a deep, cultured background burble near idle, picking up a higher whine as the revs rise until you get that distinctive rasping straight-six timbre.’ 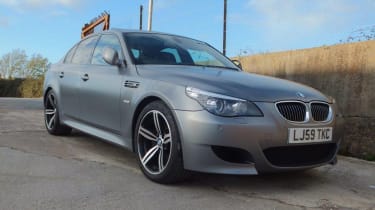 Other M5s at the auction should prove slightly more affordable. Matching its 30 Jahre successor is a 2010 BMW E60 M5 25th anniversary. Matte grey paint differentiates the 25th from other contemporary M5s, and low mileage of 29,000 means CCA’s example should sell for between £25,000-£28,000.

Those unable to stretch to a low-mileage E60 or magazine-featured E28 might be interested in the 2000 E39 M5 selling with no reserve – despite their popularity and a thundering V8 engine, E39s remain some of the more affordable M5s. There’s are 1991 and 1994 E34 M5s too, and an even more appealing 1993 E35 M5 Touring in left-hand drive. Both have no reserve.

A handful of Alpinas also feature, along with a tidy 1987 M535i and a 1996 BMW M3 Evo saloon once driven by a vertically-challenged presenter on a popular television motoring show. The latter is estimated to reach £7500-£10,500.

> Find BMW M5s for sale on Classic and Performance Car