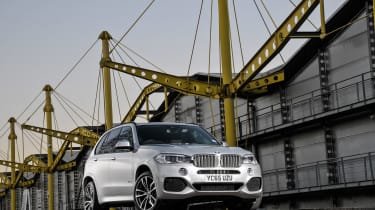 In a bid to achieve the maximum economy and lowest emissions, BMW now offer the X5 with a four-cylinder engine, generating 215bhp and 332lb ft. Furthermore the entry-level model is rear-wheel drive. Dubbed the sDrive25d, it’s the only rear wheel drive SUV in its class. A four-wheel drive version (xDrive25d) is available with no drop in performance.

All other X5s are four-wheel drive. BMW offers three variants of the 3.0-litre six-cylinder diesel, two versions of the 4.4 TwinPower turbo V8 petrol and a hybrid. With a single turbo the xDrive30d generates decent figures of 254bhp/413lb ft.  The twin-turbo xDrive40d – which BMW designates 35d in other models with this engine – trumps that with 309bhp and 465lb ft.

The madhouse X5 M50d employs three turbos making 376bhp and an incredible 546lb ft. The twin-turbo V8 petrol in the xDrive50i cannot compete with that monster diesel, managing 443bhp and 480lb ft. The X5M uses the M version of the TwinPower V8 but this time offers a staggering 575bhp and 553lb ft.

The xDrive40e is slightly more restrained but still delivers a healthy 309bhp and 331lb ft from its 2.0-litre four-cylinder turbocharged petrol engine and electric motor.

All X5s are either automatic or Sport automatics (with paddle shifts), both with eight speeds – the decision to go all-auto was made when the second-gen X5 came out, given extremely low sales of first-generation manuals. Needless to say, as this is the latest ZF transmission, there’s little to complain about with the X5’s gearboxes.