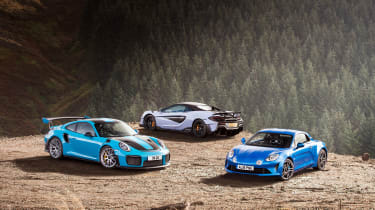 Three automotive icons. One reborn from the ashes, one the ultimate expression of ‘the’ definitive sports car, and the other the product of an industry disruptor that has transformed the industry as quickly as it entered it. The McLaren 600LT, Porsche 911 GT2 RS and Alpine A110 are our 2018 top three.

Porsche’s 991-generation 911 has had a long ride. Being bigger, heavier and in some ways unresolved on its introduction, it has blossomed into the exceptional GT2 RS. Its performance is other-worldly, an incredible expression of how far the (relatively) basic 911 package can go. The GT2 RS is interactive too, exploitable even, something unimaginable even just ten years ago with a power figure approaching 700bhp.

That the GT2 RS is probably the quickest car here over the ground, and remains a true giant killer of the higher performance kind is just the icing on the cake. Its ‘ultimate-is-best’ mentality perhaps restricts the outright driver engagement it can offer, but we adore the 911 GT2 RS, which says a lot about the cars we placed above it.

What a comeback for the French marque! The Alpine A110 has been one of the year’s most hyped cars, and for good reason it. It’s not perfect, there are refinements that could be made, but at its core the lightweight, accessible, mid-engined A110’s execution wowed us as much as its mantra. There is a crystalline feel to its responses, one created through sound foundations and well-judged execution. It’s just the kind of car that we’ve been asking for, and one we’re happy to champion at every opportunity.

In fact, the Alpine came close to overall victory – a truly remarkable feat from the brand’s first product in decades. As our winner proves, though, new players seem able to catch up pretty darned quickly, as for the second year in a row, it’s the supercar disrupter that has once again walked away with a victory.