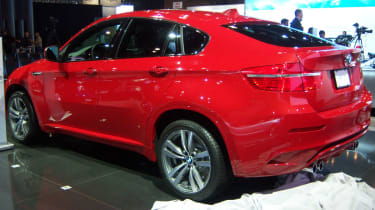 BMW’s big news in New York is the X6M SUV. Unveiled as part of a pair with the X5M, the main emphasis at the show seems to be on the X6, with a car on each of the brand’s two show stands. It boasted particular presence in red, attracting a lot of attention.

Quantities are set to be limited, which is a perhaps a wise move considering the risks you could associate with selling a two ton plus, V8 engined SUV in the current climate.

The engine itself is a 4.4-litre and gets patented twin-turbo technology, mated with turbo lag-eliminating tech in the shape of CCM (cylinder-bank comprehensive manifold). Power and torque are rated at 547bhp and 500lb ft, enough to shift the X6M to 60mph in almost supercar time at 4.5sec.

The top speed is limited to 155mph but can be raised to 171mph if you choose to equip the M Driver’s package. Fuel consumption and emissions weigh in at 20.3mpg and 325g/km of CO2.

On the flipside of the X6 coin is the ActiveHybrid version, which is set to go on sale in the US at the end of 2009 to rival the Mercedes ML450 Hybrid. It has a two-mode system that apparently ensures the optimal amount of power in any driving situation. The strapline for the car is ‘Reduces emissions, not exhilaration’. We’ll find out later this year if that’s the case, although official UK sales haven’t been confirmed.

Read more about the BMW X5M and X6M here.