Bugatti Chiron image shows most detailed look at car yet 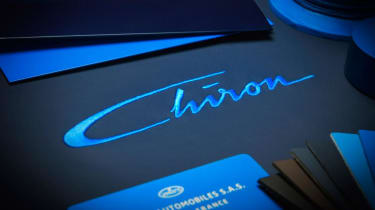 A photo of the Bugatti Chiron has emerged just a day after the launch of the new model was announced. The design evolves the Veyron shape, keeping the swooping rear roofline and horseshoe grille. Styling cues from the Vision Gran Turismo concept are also apparent, with the huge C shaped air intake and narrow headlamps both being carried over.

Posted on Instagram user Erico Hessel's page, it shows what appears to be a near undisguised side profile of the Chiron being tested on the roads of Italy. 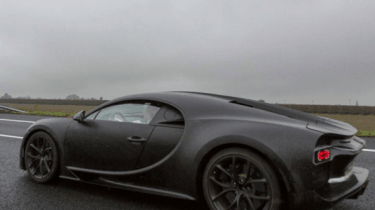 The Veyron successor, which launches at the Geneva Motorshow next year, is currently being subjected to the final stages of testing and has already received more than 100 orders ahead of its global debut at the March 2016 event.

What will power the Chiron is yet to be confirmed, but there’s little doubt it’ll increase on the Veyron’s staggering headline figures. That suggests a peak power output of more than 1200bhp will come with a sub-three second 0 to 62mph time; expect the new car to continue beyond the old car’s 268mph top speed too.

100 orders have already been placed, after selected customers from key private markets were invited to a preview for the new model. ‘The feedback from our customers concerning the Chiron is outstanding’ said Bugatti President, Wolfgang Dürheimer. ‘Our order book is steadily filling up, despite the fact that they have had no opportunity so far to experience the fantastic driving properties of the Chiron.’

The name Chiron was chosen in dedication to Bugatti’s most successful racing driver, Louis Chiron, who won a large percentage of Grand Prix races for the marque in the ‘20s and ‘30s. This follows a trend set by the Veyron – which was named after Pierre Veyron, a Bugatti development and racing driver who competed between the ‘30s and ‘50s.

Confirmation of the Chiron’s arrival lays rest to doubts that parent company Volkswagen would continue funding the model in the wake of the recent diesel emissions scandal. What's unclear at this stage is whether the Chiron will be profitable for the company – each Veyron produced represented a significant loss for the Volkswagen Group.