Want to know what a used TVR Tamora actually costs to run? We speak to the specialists... 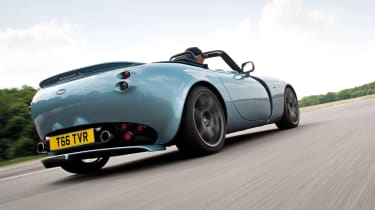 Engine and transmissionEvidence of meticulous servicing by well-known specialists is vital. According to Dom Trickett of TVR Power, the all-alloy dry-sumped Speed Six engine isn’t a problem, as long as it’s regularly serviced by people who know what they’re doing. That means every 6000 miles, with tappet clearances set every 12,000 miles. Always budget around £1500 a year for maintenance, and beware of any car where the owner has skimped. Early cars in particular suffered valvegear problems, with rapid wear of the finger followers by the cam lobes, but these have been addressed by fitting better quality replacement parts. As Dom says, ‘If an engine was going to go pop, it probably would have by now.’ If the worst does happen, TVR Power can provide an exchange engine for £5400 with a three-year, unlimited-mileage warranty and the option of increasing that to five years or 100,000 miles. The T5 gearbox is tough as old boots, but look out for clutch slip or judder – a replacement could set you back £1000. Clutch life is around 20-25k miles in normal driving.

Suspension, steering, brakesOne potential expense is replacing the diff bushes; if they haven’t been done already, it’s only a matter of time. It’s a five-hour job, so budget around £500. Also check the dampers for leaks, etc. If they need replacing, Dom really rates the factory-specced Bilsteins, but Gaz Gold Pros and Nitrons both have their advocates for track work.

Check the square-section steel chassis carefully, particularly around the catalytic converter. Dom has noticed a number of high-mileage cars suffering chassis fatigue in this area, largely as a result of the extreme heat generated by the cat, sometimes necessitating cutting out sections of the frame and welding in new metal. Tamoras don’t seem to suffer many electrical glitches, but check everything works, including the central locking, boot release and adjustable mirrors. Also check for pixel lines on the LCD display; a replacement can cost as much as £300.

With so few Tamoras built (howmanyleft.co.uk reckons around 200 are currently in the UK), prices have been holding pretty steady. The cheapest we could find at the time of writing was a 2002 car in the Netherlands, but RHD, at £14,250. £17-18k buys you a well-cared-for, low-mileage example (though few Tamoras do more than 3000-4000 miles a year). Over £20K should get you the pick of the bunch.