The best all-season tyres 2018 - The results 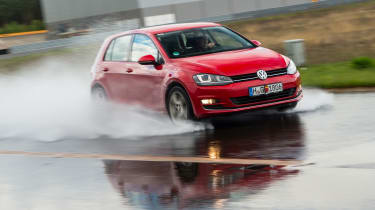 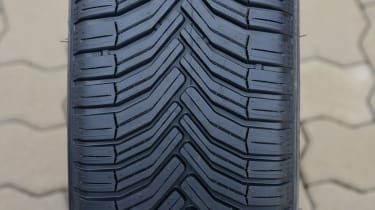 Michelin pitches the CrossClimate + as a summer tyre that’s fit for winter. In its latest iteration that statement holds true. Michelin claims the new compound is more durable, which helps prevent a performance drop-off over the course of its life. Furthermore, our test results revealed it was the best all-rounder in conditions most frequent to the UK.

While it struggled in deeper water, the likes of which are seldom seen, it swept the board in the wet and dry tests, ultimately handing it overall victory. It pulled up 1.5 metres shorter in wet braking than the second-placed Nexen, and a whole 7 metres shorter than the Kumho, which placed last.

On the wet handling circuit this ‘summer tyre’ continued to outperform its all-season rivals, lapping almost two seconds faster. Behind the wheel its benefits were tangible: it was precise, allowed you to get on the throttle hard and early, and required less steering angle to trace the desired line.

In the dry it lapped quickest and most competently, too. It drove home its advantage in the dry braking assessment, where it came to a stop at the same point where the next best was still doing 18mph.

In the snow its summer tag was exposed. However, it wasn't the worst of the lot in the treacherous conditions. To that end, it is capable of dealing with the snowfall that lands in the UK a few days a year. 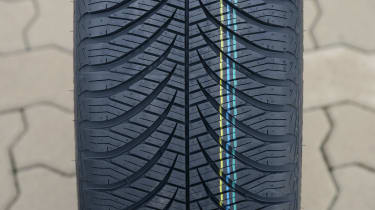 The Goodyear’s high finish comes after a strong showing in the snow-based assessments. In the wet and the aquaplaning tests it placed consistently in the top four as well, making it an able tyre in adverse conditions.

However, it didn't fare as well in the dry. Less responsive to inputs, it felt more winter tyre than summer, although it only lapped a second slower than the winning Michelin, and it earned a midfield finish in dry braking.

It would see you visiting the pump less than most of the other tyres on test, but it was the noisiest of the group. 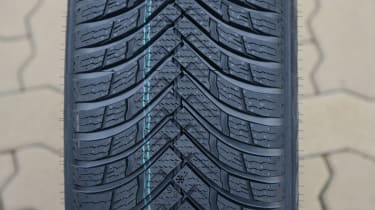 Given it is made in Finland, it comes as no surprise that the Nokian does its best work on snow. It proved a very close rival for the Goodyear in the worst of the conditions and bested the rest in the aquaplaning tests.

In shallow waters it performed less well, with a particularly poor display in the warmer wet braking test – it needed 6 metres more than our winner to slow up. Handling-wise it had decent initial bite, although grip subsided as more lock was dialled in.

It was a similar story in the dry, where a bottom-half finish prevented it from competing with our winner. The Nokian did claw back points with the lowest rolling resistance on test. 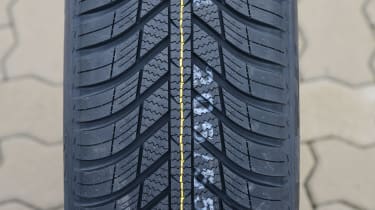 In shallow water only the Michelin outperformed the Nexen, which offered strong traction and a sharp turn-in. However, in deep water, particularly in the curved aquaplaning test, it really struggled, robbing it of a third-place finish.

In the four snow tests it collected a trio of top-three finishes, with impressive traction a recurrent theme. In the dry it wasn’t too bad either, pulling up shorter than all but the Michelin, although it lapped sixth fastest on the handling circuit.

While not the most efficient, it was one of the quieter tyres on test and altogether easily recommended. 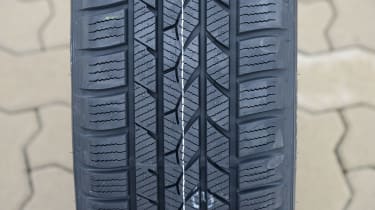 The Falken just edged out the sixth-placed Hankook on account of its better performance in snowy and wet conditions. While the Falken posted a quicker lap on the dry handling circuit, it struggled in dry braking, needing a metre more to pull up than the Hankook. Even so, it finished second overall in the dry handling table.

In Finland it failed to make a great impression, occupying the second or last spot on three of the four snow tests. A better showing in wet testing prevented it from finishing too far down the order, although it didn't breed great confidence on the wet handling track, with a lack of front-end bite to blame. In terms of fuel consumption it was about average. 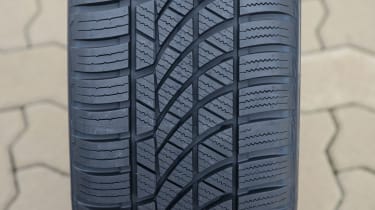 Like the leading Michelin, the Hankook leans more towards being a summer tyre, and it showed. Both traction and grip proved hard to come by on snow and it didn't fare much better in the wet, either. Surprisingly, though, it coped better than most in standing water.

On drier surfaces the Hankook was at its best, turning in with alacrity and a general liveliness that earned it two podium finishes. For a new design of tyre, the fuel economy performance was somewhat disappointing. 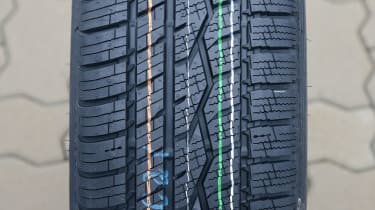 There was nothing to redeem the Toyo’s sub-par performance. While it was best suited to snowier terrain, it wasn’t pack leader in the colder climes, nor could it compete with the front runners in the wet tests. In deeper water it fared better, performing similarly to the best in the straight test, although it struggled during the curved run.

On the wet handling circuit corners had to be approached with caution; front-end grip dissolved abruptly, so throttle applications had to carefully managed to stay on line. In the dry it handled competently, proving nearly as grippy as our winners, but under braking it was the worst of the tyres on test. Compounding its low finish it was also the least efficient tyre. 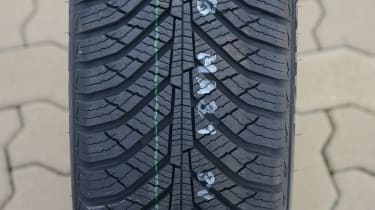 At four years old, the Kumho is outdated and its performance here reflects that. In the wet tests the Kumho lagged far behind the pack.

Under wet braking, in both warmer and colder environments, it needed 4 metres more than our winner to come to a complete stop. However, on snow it found more purchase, helping it slow the car better than most. It was in these conditions where the Kumho performed best, finishing in the top half for the majority of the Finland-staged tests.

The Kumho couldn't replicate the confident performance in the dry. Once again it took the longest distance to stop, and it was slowest on track, although it at least remained controllable all the while. 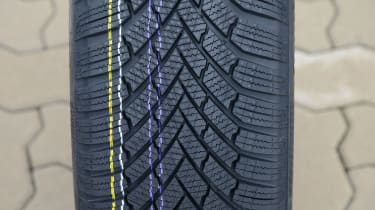 Continental proved that you could use a winter tyre year-round without issue courtesy of the TS 860. It ranked best overall in the snow and wet disciplines, and gave little away in the dry tests, where you might expect it to come unstuck.

This winter option provides a viable alternative to the array of all-season tyres tested above. However, keep in mind that this is a particularly capable and unusually rounded winter tyre. 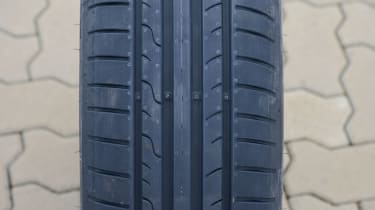 The Dunlop did not take well to the snowy conditions. It was no match for the all-season tyres – traction and a grip were at a premium – so we didn’t even set a time on the snow handling track as a result.

Away from the snow the summer tyre of course performed much better, particularly in warmer temperatures where it outshone the all-season tyres, even in the wet. In the dry it was best too, as you would expect it to be. Furthermore, it was more efficient than the all-weather tyres.