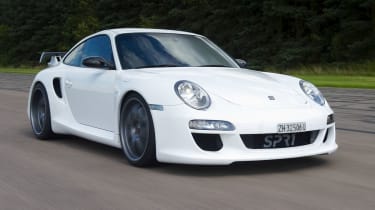 It’s a 911. But not as we know it. Standard 911 Turbos don’t come out of the factory with carbon-Kevlar bodywork. They aren’t born with a secondary safety cage, two injectors per cylinder and titanium conrods either. Above all, Weissach doesn’t equip them with the firepower to see off a Veyron.

Sportec does, however. Let’s deal with the Veyron-spanking claim first. When we figured the Bugatti in issue 134, 60-160mph took 11.1sec. It’s a weird increment to look at, I know, but when we asked if we could find out for ourselves just how fast the SPR1M actually is, Sportec agreed with the proviso that we go easy on the car for the first couple of gearchanges. So, the result? On the same stretch of concrete at the Bruntingthorpe Proving Ground the SPR1M completed the same 100mph jump in 10.3sec, so, yeah, it’s very much made of the right stuff.

The pursuit of speed and speed alone is not the Sportec’s sole aim, though. Instead think of it as the ultimate 911 Turbo, the sort of bespoke creation that recently retired Porsche CEO Wendelin Wiedeking might have hoped to receive as a leaving gift – but probably didn’t.

Deliver a standard 911 Turbo to the small Swiss outfit and they’ll go at it like a shoal of piranhas, stripping it back to a skeleton. All that’s left of the engine is the block (which retains the 3.6-litre displacement) and crank, while bodywork, wheels, suspension, brakes and gearbox are all junked (although the four-wheel-drive system is retained). Then the eight-month, £500,000 transformation begins. A roll-cage increases body rigidity by a massive 30 per cent, a second ECU runs the extra injectors, and the steering pump is moved to the front to allow more space for an entirely new split-intake system. Meanwhile, the gearbox from the GT2 is fitted, as are front brake discs of secret origin (Ferrari perhaps?) and suspension recast in lighter materials (the Bilstein dampers still talk to Porsche’s PASM active damping system). Impressively, the majority of the changes, including the carbon bodywork that accounts for the lion’s share of a considerable weight saving, are designed, engineered and built in-house by Sportec’s 19 employees. They’re a talented bunch.

It’s a slightly more surreptitious way to travel too, eschewing traditional supercar drama in favour of curved, sleek muscle. It looks pumped, though, and those deep, deep 20in wheels and the zero-clearance ride height set it off a treat. Sat flat on the tarmac, it looks formidably purposeful.

The cabin is a calmer, more familiar place, but not pure 911 either. The first few times I climb in and out I bang my heels on the Alcantara-clad roll-cage that hugs the doorsill, while the new leather and Alcantara bucket seats are so snug there’s no room for love handles. A tentative poke of the clutch, which can handle up to 1200Nm (884lb ft) of torque, confirms my left leg’s worst fears.

But the true mark of this car is how cohesive and beautifully assembled it all is. And as you’d hope of a firm that puts this much work into the look and feel of a car, you’re not sold short on the dynamics. The first time I drive the Sportec I head out onto nearby roads, and from the get-go it feels like a 911 Turbo that’s been condensed, distilled, had all impurities removed. No Turbo has ever had a more talkative, precise front end, nor delivered such steering clarity, nor built so much ride tolerance into so little travel.

Where’s the suspension bobble through corners, the rear-end squat, the faint corkscrewing motion? Gone. This thing drives like a GT3, all poise and alertness. Intimidating? No more than a modern GT2 and, to be honest, it’s only scary because at this stage the engine is an unknown quantity.

What I’m most taken with is how drivable the SPR1 M is – it’s got great steering lock, a weighty but gorgeously accurate gearshift, a clutch that engages sweetly, a chassis that happily eats up A-roads at a loping gait and does your bidding without hesitation or deviation. An 846bhp pussycat, then? Up to a point. That point being about 5500rpm.

Not that it isn’t quick lower down. It’s ultra-tractable from 1000rpm and the sequential turbos (which only blow at 1.4bar) are very responsive. Acceleration just builds and builds and builds. Push becomes shove, shove becomes hurl. Yep, you think, this feels hilariously rapid – not sure about that Veyron claim, though.

Then there’s the lull. Not a pause as such, just the merest suggestion that things might be tailing off. It lasts for 500rpm, enough time for you to drop your guard, take a breath…

A mate of my dad’s used to fly Concorde and I remember him telling me that when you lit the afterburners out over the Irish Sea all the acceleration you’d already experienced paled into nothing. I think he’d recognise a kindred spirit for the Concorde in the Sportec.

A split second before impact there’s a whoosh of turbo, but that always plays second fiddle to the gloriously guttural flat-six, so you don’t properly prepare yourself for the catapulting weightlessness that lifts your feet off the carpet and treats you to an impromptu Croydon facelift. Best of all, this explosion of energy isn’t a flash in the pan, but a hurricane gust that’s sustained, via long gearing, for the next 3000rpm.

Now it feels like its got 846bhp. Now it feels Veyron fast. Now would be a good time to hit the brakes… The SPR1 M is utterly unfazed, slowing down as effectively as it speeds up, and doing so time after time as I scratch the speed itch. With space to play, I discover how exploitable the Sportec is, that you can tackle corners at high revs without fear of the traction being overwhelmed, that it’s balanced and progressive near the limit – and that the noise it makes is the business. It’s tuned to sound like an old GT2 racer, apparently, but with a bypass valve (operated by a remote control) for quieter moments.

Sportec will build just ten SPR1s. Four are already with owners, and this, the fifth, is the first ‘M’ (modified) version, benefiting from a couple of engine tweaks that help liberate an extra 55bhp. It’s a gorgeous thing – a hypercar you can work with, a Veyron without the baggage and numbness, a vice-free any-occasion rocketship with a low radar reflection. Above all, it’s a quality piece of kit.