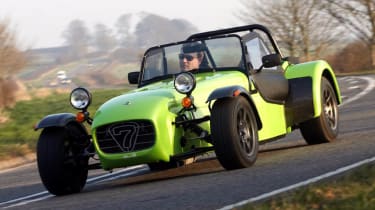 An electric-powered Caterham is just around the corner.

The sports car firm’s boss – Ansar Ali – has revealed that hybrid and electric powertrains are in development, and that a prototype should be seen before the end of the year.

Interestingly, the car is likely to be developed in motorsport, an avenue Caterham views as a testbed for the new technology. There could be a one-make racing series starring an electric or hybrid Caterham by 2011, which, depending on the outcome, could lead to a road car a year later.

The hybrid and electric drivetrains in question are being sourced from other, unnamed manufacturers. They’re expected to weigh around the same as Caterham’s existing petrol engine and gearbox combinations, meaning the performance of its cars shouldn’t take too much of a dent.

News of Caterham’s forward-thinking technology has emerged at the Tokyo motor show, where the plucky British sports car brand is one of only three European brands on display, alongside Lotus (who unveiled the striking Exige Scura) and Alpina.