The new Caterham 620R is the most extreme road going Seven yet, and it replaces the R500 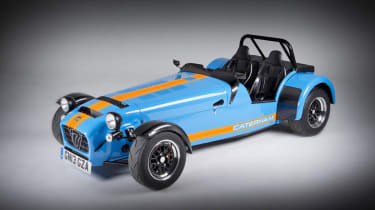 Caterham has launched the 620R, a car the company describes as ‘the most hardcore production Seven ever built for the road’. It replaces the outgoing R500 Superlight, and boasts a power-to-weight ratio of 620bhp-per-ton - more than a standard Bugatti Veyron's 521bhp-per-ton.

The lightweight model uses a supercharged 2.0-litre Ford Duratec engine, similar to the R600 racer, but in an even higher state of tune – now pushing out 310bhp. This has required a lot of extra cooling, which was developed on the Caterham race cars.

Uncompromised performance is what this car is all about, and Caterham says the supercharged Seven will propel you from 0-60mph in ‘under 2.8secs’, onto a top speed of 155mph. The front of the car features a new more aerodynamic nose, and there are large amount of carbon fibre parts used in the interior to keep weight as low as possible.

Find a used Caterham on evo Cars for Sale

Like the R500 it replaces, the 620R utilises deDion rear suspension and high-performance dampers on all four corners. The 13-inch lightweight alloy wheels come with sticky track-biased Avon ZZR tyres.

Although the 620 will be launched in the more hardcore R specification, Caterham has announced that there will be a slightly softer S spec model coming later, with the same power output, but in a more usable and accessible package.

At launch, this will be Caterham’s range-topping model, costing £49,995 on the road, at the complete opposite end of the scale to the sub-£17,000 basic Caterham model that was recently announced. The 620R will make its public debut at the Goodwood Festival of Speed, where Caterham F1 driver Charles Pic will drive the car up the hill climb. First deliveries are expected towards the end of the year.