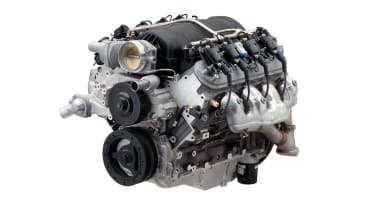 General Motors has revealed a powerful new crate engine based on the naturally aspirated 7-litre V8 that featured back in the C6 Corvette ZO6 and the Camaro Z/28. Designed specifically for hot-rodders, tuners and artisan sports car manufacturers who often utilise crate engines as a fast and effective engine swap or integration, this new naturally aspirated V8 continues a long line of GM crate engines that have been a staple of the tuning scene since the 1940s.

The new engine is called LS427/570, referring to its LS-family engine designation, 427 cubic-inch capacity (that’s seven litres in metric) and the 570 flywheel horsepower it produces. Closely related to the LS7 unit found in the models mentioned above, GM has installed a new high-lift camshaft that’s responsible for a majority of the 65bhp and 70lb ft increases over the production LS7.

GM has also fitted a wet sump oil lubrication system instead of the dry sump found in the production models, doing away with the need for a separate oil tank, lines and its ancillaries, making for a much simpler installation, while the exhaust manifolds are based on those used in the Camaro Z/28. Inside the block is a high-strength forged aluminium crankshaft and titanium conrods, while the low-profile EFI intake manifold, fuel rails, injectors and throttle body all keep the top of the engine streamlined in consideration of the taller sump at the bottom of the engine block.

The new LS427/570 is just one in a whole range of engines and transmissions that Chevrolet manufactures in crate form, from engines such as the classic 35 cubic inch V8 first designed in the late 1950s, right through to the 750bhp supercharged V8 LT5 from the 2019 Corvette ZR1.

Although fitting crate engines in the UK is uncommon in street-legal conversions, the crate engine is still the backbone of the hot-rodding, drag racing and other competition formats, providing big power in a reliable and cost-effective manner. The engine is so far only available in the USA, with future local availability and pricing unconfirmed at this stage.