The Chevrolet Camaro muscle car officially makes it to the UK, priced to tackle TTs and 370Zs but with V8 power 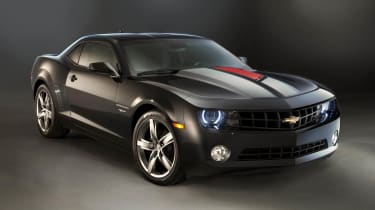 Official UK sales of the Chevrolet Camaro have started. And it’s priced exceedingly competitively, going into battle against high-spec Audi TTs and Nissan 370Zs with a 6.2-litre V8 engine. The Camaro Coupe costs £34,995, the Convertible £39,995, both boasting a 426bhp/420lb ft naturally aspirated V8, driving the rear wheels through a six-speed manual gearbox. A six-speed automatic is an option, but this shaves 27bhp and 10lb ft from those maximum outputs. The Camaro, like many of its rivals, has a 155mph limited top speed, though 0-62mph takes 5.2sec in the manual, several tenths quicker than its European and Japanese foes. Returning 20mpg (claimed, combined) and emitting 329g/km of CO2, it’s certainly not as clean as them though. Standard equipment includes 20in alloys, Brembo brakes, a nine-speaker audio system and a head-up display.

For a limited time, the 2012 45th Anniversary Camaro – complete with Carbon Flash Black paint and red detailing – will be available for a £1500 premium. Sadly, the Camaro remains left-hand drive, but with just 200 a year set to make it to the UK, Chevrolet’s reasoning is understandable. There’s no word on whether high-performance versions – such as the monster new Camaro ZL1 – will make it to these shores, but if the standard car proves a success, we’ve every chance. Get buying…