The Chevrolet Camaro Z28 has lapped the Nurburgring. Full details and video of the lightweight, hardcore Camaro here 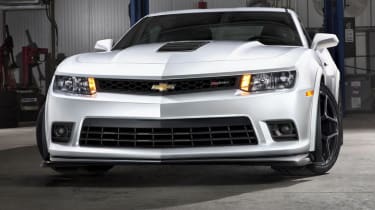 Chevrolet has taken its most hardcore track-biased Camaro, the recently launched Z28, to the Nurburgring. Although the circuit provided less than ideal weather conditions, the Z28 lapped the Nordschleife in a time of 7:37.

The last vehicle wearing a Z28 badge was released over a decade ago, and it was a Camaro with just 310bhp. Chevrolet claims the new Z28 will produce 470lb ft and 505bhp, its naturally aspirated 7-litre LS7 V engine borrowed from the Corvette Z06.    The Z28 is the most track-focused Camaro ever engineered. Corvette Racing has been called in to co-develop the motor, fitting it with a dry-sump oil system, high-lift camshaft, ported cylinder heads and a forged crankshaft, as well as titanium valves and rods. The only transmission available is a 6-speed Tremec manual, run with close-ratio 3.91:1 track gearing. Race-prepped dampers are adjustable at all four corners, helping to lower the center of gravity by 33mm. The Z28 sheds 136kg from the top-model Camaro ZL1 by ditching its boot carpet, stereo and air conditioning (though the latter is optional), while also thinning out sound insulation and glass. Lightweight 19in alloy wheels trim 19kg of unsprung weight from the muscle car, and the Z28 lays claim to the first use of Pirelli PZero Trofeo R tyres on a production car. Brembo is responsible for the braking system; carbon ceramic discs paired with six-pot calipers. An extra cooling unit for the transmission and differential is standard, too. Like all 2014 Chevrolet Camaros, the Z28 will get a more aggressive front end and squared taillights to better distinguish it from the new Corvette Stingray, while it retains the model’s 2+2 seating to differentiate it from the ‘Vette. But the Z28 also gets a special aero package, consisting of a large front splitter, flared fenders, an underbody panel and functional rear diffuser.  All of this together allows the Z28 to deliver 1.05g of lateral grip and generate 1.5g of force during deceleration. It’s also quicker on track than the ZL1. US sales of the 2014 Camaro Z28 begin later this year. There’s no word yet on the likelihood of official UK imports of the Z28, but GM will be introducing official imports for the standard model later in the year.