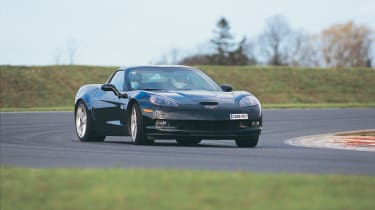 How much power is too much? When is fast a bit too fast? When do you stop searching for huge bhp numbers and tiny acceleration figures? Well, the good men at Chevrolet decided that 505bhp was quite enough for the ultimate Corvette. And when you drive the car they re-engineered, fettled and tweaked to cope with all that power, it’s hard to disagree. The Z06, even with a thoroughly revised and exotically-constructed chassis, only just copes with the sledgehammer delivery of its thundering 7-litre V8. When you open the taps, it’s like mother nature is coming to eat you…

But for some people 505bhp from 7011cc just looks like an opening gambit. Meet David Yu, friend of evo, power junkie and perhaps one of the few men for whom the Z06 is a little, well, limp. In fact there’s a whole industry dedicated to tuning the Corvette in the US, and the Z06 is its new darling. Lingenfelter, based in Decatur, Indiana, is one of the most respected of the Vette tuners and when Yu found out that the company was offering a 616bhp package with a full three-year warranty for just $5700 (circa £2900), it was just a matter of time before his Z06’s block was in pieces.

The kit consists of freer-flowing exhaust headers, race cats, a high-flow induction kit and mass airflow sensor and a more extreme camshaft (just the one, of course). The resulting boost in power sounds almost unfeasible given the relatively simple nature of the upgrade, but Lingenfelter is very well respected and has been working on the enduring Chevy V8 for 25 years.

Ian Goss Services, the Surbiton-based specialist in US muscle, fitted Lingenfelter’s hot parts in just a few days. Total cost: £5500 (including VAT, duty and £1500 fitting). Unfortunately the three-year warranty doesn’t stand in Europe as Lingenfelter only guarantees cars prepared in its Indiana workshop, but the fact that it offer a warranty at all gives some peace of mind. Besides, your life expectancy is probably severely reduced with a 600+bhp Corvette anyway; you’ll be lucky to be around long enough to hear it go pop…

After a lap of Bedford’s West Circuit I’m almost praying to hear valves clattering into pistons. That big V8 is borderline scary in standard form; with the Lingenfelter kit, it’s just plain terrifying. The extra muscles start to flex almost from tickover (despite an uneven, dragster-like idle, the lumpier cam soon smoothes out), but it’s when extended beyond 5000rpm that the engine starts to feel uncomfortably violent. Few supercars offer such an enormous and sustained hit of raw acceleration.

You can use it, too. The 325/30 ZR19 Goodyears manage to convert most of the power into forward motion, and although you can spin them up gratuitously in second- or third-gear corners (third is good for 123mph!), the Z06 remains surprisingly composed. It’s not an easy car to exploit, though. Deliberately breach the limits at lower speeds and it’s easy to slide for whole minutes, but when you’re trying to nudge up against its ultimate potential it feels ready to punish any indecision or clumsiness.

There’s a bit of turn-in understeer (no bad thing), but it’s when you’re in the middle of the corner that the Z06 feels a little remote. You want that understeer to stabilise and then bleed away as you apply more throttle, but it doesn’t. Instead the front keeps pushing and then, when you’ve flexed your right ankle a millimetre too far, the car snaps sideways – this lack of equilibrium means you tend to need lots of small, accurate corrections.

Considering the very stiff ride, it’s very odd to find a bit too much body-roll, almost as if the anti-roll bars don’t match the springs and dampers. Trying to combat the knife-edge balance and managing the body movement makes for a wild ride, but the results are stunning. After five laps the Lingenfelter Z06 posts a best of 1:22.40. Faster than the optimised 599 GTB (p92), faster than the Lamborghini Gallardo, just a tenth behind the Koenigsegg CCX. And all for £60,000. Incredible.

Lined-up on the long back-straight at Bedford for the acceleration runs (Millbrook was unavailable) the conversion proves its worth again. The in-gear times all but match those of the 599 GTB (even more impressive when you consider that the Vette has much longer gearing – second, for example, peaks at 77mph in the Ferrari, 91mph in the Z06, third is 107mph versus 123mph), and although it can’t quite live with the GTB’s incredible launch technique, a 0-60mph time of 3.8 seconds is pretty impressive. The numbers flash by: 0-100mph in 8.2sec, the quarter-mile in 12-flat at 125mph, 0-140mph in 14.5. It’s a mighty performance in any context, and substantially quicker than we managed in a standard Z06 (0-60 in 4.1, 0-100 in 8.9).

However, the difference is perhaps not quite as marked as you’d expect with a 110bhp boost. Next we visited WRC Technologies in Silverstone to put the Lingenfelter Z06 on the Dyno Dynamics rolling road. It showed a strong gain but couldn’t better 552bhp. Not bad, but we’d hoped the magic number might start with a ‘6’. David Yu is now in discussion with Lingenfelter to see if some of the horses drowned somewhere mid-Atlantic. Just imagine how fast it’ll be when it’s running the full 616bhp…

The route from Bedford to Silverstone takes in narrow and extremely bumpy B-roads, fast A-roads and dual-carriageway. On the B-roads you never venture over 5000rpm. Combine a very hard ride with masses of power and the result is that you simply don’t have the confidence to fully unleash the engine. On the fast A-roads it’s much more assured; stable, grippy and devastatingly rapid. Here the extra performance can be put to good use.

So is the Lingenfelter kit worth the outlay? Well, it’s hard to sniff at a ten per cent gain in power in a normally aspirated engine (perhaps more when Lingenfelter gets to the bottom of the missing horses) for a relatively low asking price. The fact that the brawny V8 remains tractable and well-mannered is even more impressive. However, for me the Z06 is already quite fast enough. I think I’d invest my £5500 elsewhere, and with track driving in mind the suspension would be a good start…