The all-new SRT8 version of the Chrysler 300C offers similar performance to the BMW M5 and Mercedes E63 AMG, but with a big saving 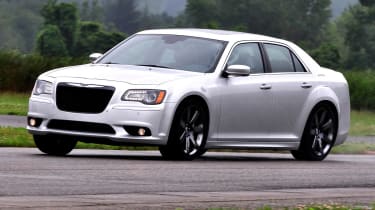 America’s answer to the BMW M5 and Mercedes E63 AMG. It’s just gone on sale in the US and could well turn up in the UK later this year, when its price

might just make a few people sit up and take notice – expect it to undercut the BMW and Merc by around £20,000. Are the Germans 20 grand better?

The engine. A 6.4-litre Hemi V8 with 470bhp that’s as American as Mickey Mouse eating mom’s apple pie. Make that low-fat apple pie – Chrysler has gone all efficiency on us. The SRT8’s V8 featuring a fuel-saving mode that allows it to cruise using just four cylinders, making it 21 percent less thirsty than the previous 300C SRT8.

Of course, it’s more powerful (an extra 45bhp) and has more torque (up 50lb ft) than before, while new engine mounts make it smoother too. Tweaks to the camshaft and cam phasing have produced a broader spread of torque as well.

Seriously fast. Chrysler has gone a bit soft lately by refusing to quote 0-60mph times – we’re told the SRT8 is in the ‘high fours.’ But as SRT stands for Street and Racing Technology, we took it to a street right outside Chrysler’s HQ in Detroit to find out how fast it really is.

There’s a clever in-dash timer, which measures 0-60 and quarter mile times, braking and G-forces, and we recorded a best of five seconds dead. On anything other than the cold concrete surface we were on, we reckon 4.8 sounds achievable.

Grip is an issue – even with the traction control on there’s an enjoyable squeal as the rear tyres struggle to hook up. Turn the TC off and you could find yourself going nowhere at the front of a sudden bank of fog. Around bends the back end can get lively if asked to handle too much power, but the steering is quick witted enough to keep everything in some sort of order. This is a big car, though, and it lacks the dynamic sophistication of its European rivals. It always feels heavy and doesn’t like quick changes of direction, while the five-speed auto (remember those?) with steering wheel paddles isn’t the speediest shifter.

If, as we hope it does, the SRT8 does come to the UK with a sticker price around the £55,000 mark then it will undercut all its obvious power rivals by a substantial margin. Performance numbers are broadly similar to those of the BMW M5 and Mercedes E63AMG. The Chrysler can’t match the dynamic polish of its German rivals, but it’s certainly got them licked on price.

The 300C has both the M5 and the E63 licked for interior space, while the cabin quality is surprisingly impressive. Who would have thought Fiat could create an American car interior that’s almost as good as its German rivals?

In US terms, the SRT8 is fully loaded. Everything is covered in leather, and the cup holders can be either heated or chilled. The technical highlight is an 8.4-inch touchscreen system that includes a Garmin satnav, voice control that actually works and (in the US) clever news reporting that includes weather forecasts and sports scores.