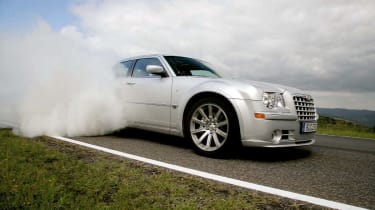 The Chrysler 300C Hemi caught us by surprise. We all loved the way it looks from the moment we saw it, but expected it to be a woolly, floaty pudding of a car. In fact it’s nothing of the sort. OK, so the big 300C isn’t a scalpel-sharp bargain M5 alternative, but it is a characterful and genuinely entertaining saloon. With more power, bigger brakes and tighter body control, we thought, it had the potential to be a real hero car.

Gently shimmying under the torque of its huge 6.1-litre V8 engine, sitting low on its stiffened suspension and riding on huge 20in wheels, the new 300C SRT8 looks perfectly at home amongst a gaggle of Porsches and a sprinkling of tricked-up, hunkered-down BMWs in the car park at the Nürburgring. Incredibly, we’re here at Chrysler’s behest, and we’ve got the keys to that faster, sharper 300C we’d daydreamed about.

Officially, the launch of the 425bhp 300C SRT8 is scheduled to be on a small section of the modern, sanitised Nürburgring next door, but when I mention that the ‘real’ circuit is open to the public all day, they simply shrug and say we should go for it. If Chrysler’s confidence is anything to go by, our suspicions were dead right…

SRT, or Street and Racing Technology, is to Chrysler what AMG is to Mercedes. Indeed there’s even talk of the two ‘sharing knowledge and ideas’ in the future. Right now that doesn’t extend to AMG gifting the Chrysler boys their brand new and wonderful 507bhp 6.2-litre V8 (see the E63 AMG on page 52), so they’ve had to make do with fettling their own 5.7-litre V8. By increasing the bore spacing by 3.5mm, capacity has risen to 6.1 litres, and with it power has leapt 85bhp to 425bhp at 6000rpm and a rippling 420lb ft at 4800rpm.

In fact, the SRT division has really gone to town on the engine. High-flow heads, bigger, sodium-filled valves and re-contoured ports are just the start of the upgrades. There’s a new intake manifold too, and in the best American tradition the exhaust manifolds are ditched in favour of good ol’ ‘headers’, helping the engine breathe much more freely. Raising the compression ratio makes the most of the bigger lungs, and a reinforced block and forged cranks ensure it all hangs together at 6200rpm.

The price of all this hidden work, not to mention the upgrades you can see (including new 360mm front brake discs clamped by four-piston Brembo callipers), is a hefty £39,040. That sounds like a lot of money, but the SRT8 has more grunt than the previous-generation M5, can get within a whisker of 170mph and can scrabble to 60 in 5sec flat. The numbers say it’s a supersaloon, and taken as such, a price of under £40K is actually remarkably low.

That figure certainly buys you a lot of attitude. The 300C cuts a menacing figure out on the road, and the huge 20in wheels and lower ride height of this SRT8 add to the sinister swagger. They also promise some real dynamic bite. Generously proportioned Goodyear Eagle Supercar tyres (the same rubber you’ll see on the Ford GT and Corvette Z06) should take care of sheer mechanical grip, and the minimal suspension travel looks spot-on to control that imposing body.

Inside, the SRT8 feels as big as it looks. You survey the massive bonnet and surroundings from on high, the steering wheel is simply enormous, and as you scan side and rear-view mirrors, the scale of the 300C is inescapable. The standard-issue five-speed auto can’t be accessed via paddles or buttons on the steering wheel, and there isn’t even a Sport mode to sharpen the shift, but you can manually override the shifts by knocking the gearlever from side to side. It’s not the most intuitive of systems.

Still, with 420lb ft on hand, changing gear should really be an optional exercise. And when you fire the 6.1-litre engine into life, select ‘D’ and squeeze the throttle, the SRT8 feels suitably muscular and effortless. The ride is serene, too. In fact it’s almost shockingly good considering the 20in wheels. I’d still like just a smidge more aggression, though.

Start to use more of the 300C’s throttle travel and the big V8 responds in kind. However, for such a large-capacity unit it’s surprising that you need at least 3000rpm on the dial before the SRT8 starts to feel like a 425bhp car. Long gearing and a hefty kerb weight (1965kg) combine to blunt the Hemi’s low-down push. Work the engine hard though, and the hammering bent-eight soundtrack is matched by big-cube grunt.

Even so, it’s extremely tricky to unstick those gumball Goodyears, even with the ESP system disabled (although, like a Mercedes, it never grants you complete free rein). Instead, more enthusiasm usually means more and more understeer. On the road this nose-heavy balance, implacable traction and slow steering can make the SRT8 feel clumsy. Not good signs before a full-blown lap of the Ring…

With the epic circuit rising and falling ahead, the SRT8 initially feels all at sea. The light steering chips away at your confidence, and the brakes are having to work hard too, mainly because the auto ’box is reluctant to change down into corners (even when you’re frantically pulling at the shifter).

By the halfway point I’m more in tune with the big 300C, though, and suddenly it all clicks. Bullying it doesn’t work, but guide it into turns, tweak rather than throw, and it ups its game, flowing with poise and showing signs of genuine agility.

Back on the roads nearby, this more considered approach works wonders. You’re never going to overcome the SRT8’s inherent understeer through anything but tight hairpins, so don’t bother trying. Simply drive within its ample limits and enjoy the soundtrack, the grip, the sense of occasion.

The 300C SRT8 might look like a tough guy, but it’s really still a big-hearted softie. Disappointing if you’re after a kick-ass 21st century muscle-car, certainly, but still strangely appealing.