Alfa Romeo 4C Coupe and Spider review - it may look like a miniature supercar, but does it drive like one? - Ride and handling

When nestled in the 4C, you feel low and close to the ground. The interior is small, but the seating position is good so it’s easy to get comfortable. From the inside the blaring exhaust isn’t dissimilar to that of a modern day WRC car.

The rally-esque noise, combined with it’s pretty exterior and slightly cramped interior, could convince you that the 4C is a modern day Lancia Stratos. But, just as modern rallying is less spectacular, sounds worse and is marginally disappointing, so is the 4C.

The driving experience in the little Alfa is probably best described as demanding; it requires your full attention to try and thread it down a challenging road. The unassisted steering that, in concept, has the potential to offer uncorrupted, pure and delicate steering feel, couldn’t be further from that expectation. Around the dead-ahead position, the steering is light and vague. Also, the 4C seems to seek out even the slightest cambers in the road and over any imperfections the steering wheel is tugged around in your hands.

You need to make constant corrections with the steering. Catching little drags, or pointing the car back onto the trajectory you’d originally wanted to take. Even on A-roads and motorways, it doesn’t settle. 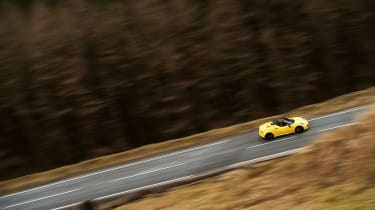 Away from towns and dual carriageways, and onto the sort of roads a sportscar should be designed for, the steering still blights the experience. Bumps and ruts will cause the Alfa to dramatically shift one way or another, sometimes mid corner.

The bumps and ridges that affect the steering so significantly are also transmitted through the chassis thanks to a slightly harsh ride. It’s not unbearably stiff though, and suits the more hardcore nature that the exposed carbon chassis, bare aluminium pedals and loud exhaust establish.

Considering the stiff ride, and how wide and low the 4C feels, there’s more body roll and pitch than you’d expect. It’s not the stubbornly stiff, road-racer you might imagine. The body movements, although surprising to begin with, are actually very well managed. The suspension never allows too much roll, just enough to help you gauge how hard you are driving.

The front dives under braking, which really helps load up the front tyres. With such a light car the brakes don’t have much to deal with, and so, are very effective. There’s no exaggerated initial bite either, meaning they feel very progressive and easy to modulate too.

During braking is when the steering feels most consistent. With more pressure on the front tyres, the pulling and tugging from the steering is reduced. As expected though, under acceleration with most of the weight on the rear tyres, the steering changes again and feels very vague and unpredictable.

The body roll contributes to the huge amount of cornering grip the 4C possesses. You can, with enough conviction, enter a bend at quite significant speeds and there’s plenty of traction on the exit too. But having the dedication to commit to a corner requires some faith. As you come off the brake, turning into a corner, you feel disconnected from the steering just for a moment. It isn’t long, but it’s enough to destroy any confidence as you aren’t sure how the 4C is going to behave; will it grip and turn-in or understeer and wash wide.

Dig deep, and push the 4C closer to the limits of its grip and things become scruffy. The front will be fall into understeer which then, very quickly transforms into oversteer. Without an LSD, the resulting slide is best caught immediately. The whole process feels scruffy and unsatisfying, and confirms the Alfa is best at driven at a more relaxed pace. 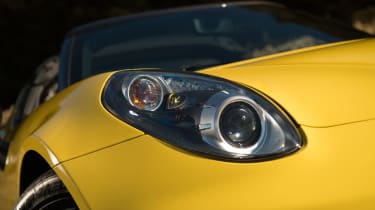 As the steering in both the Spider and the Coupe both feel the same, and it’s what completely dominates the experience, there isn’t much that separates the two. The Spider does allow you more access to the engine noise, but that isn’t exactly a good thing.

On a smooth track, the steering no longer tries to divert you off your chosen path, however it still feels numb. The rest of the experience is much the same as on the road, but exaggerated further. Push hard and there is excessive understeer, followed by large amounts of, unsatisfying, oversteer.

When trying to extract a lap time, the engine and gearbox, that are reasonable on the road, become frustrating. Shifts feel sluggish, and the poor throttle response doesn’t allow for the fine adjustment needed on track.

Alfaworks, a UK based company attempted to right many of the 4C’s wrongs. They have created CNC-machined aluminium blocks to make the front track wider and increase the caster angle, a flexible rubber bush has been replaced with a solid mount to decrease the rear axle steer, they have fitted Öhlins Road & Track dampers to allow adjustment for compression and rebound as well as ride height, a bespoke set of OZ Alleggerita HLT rims (7.5 x 17 front, 8.5 x 18 rear) wearing Toyo Proxes R888R tyres and last but not least some feedback from David Vivian who’s part of the evo road test team. 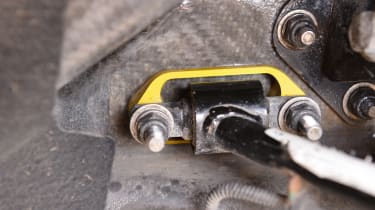 The result isn’t dramatic, the Alfaworks 4C is still hunts out cambers in the road and the steering wheel is tugged around in your hands. However the Öhlins dampers have added far more control while also increasing the comfort. While the changes to the geometry have improved the about-centre steering response markedly and now gives the detailed feed you’d expect from an unassisited rack. The Alfaworks car turns-in with a crispness the standard car can only dream of, and it’s also more intuitive should the rear step-out.

If that doesn’t sound in-depth enough, Alfaworks have also remapped the ECU to raise peak power to 280bhp with 310lb ft of torque.