Limited to just 60 examples, the high-performance Oselli Edition packs 40 per cent more power but comes with a hefty price tag 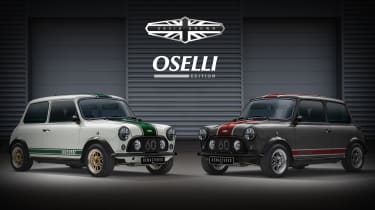 To honour and celebrate the debut of the original Issigonis-designed Mini 60 years ago David Brown Automotive has announced a limited-run Oselli Edition of its Mini Remastered. Featuring a larger A Series engine and a new gearbox, as well as a host of customisation possibilities, the Oselli Edition will be limited to just 60 examples. You’ll have to dig deep though, as prices start at £117,600 (including VAT).

As the name suggests, Mini Remastered has teamed up with renowned classic car specialist and engine tuner Oselli to provide a 1420cc Stage 3 version of the four-cylinder A series which is good for over 100bhp – a 40 per cent increase over the version of the engine found in the standard Mini Remastered. Further modifications have been made to both the exhaust and the air intake, while a five-speed gearbox has been added for less frenetic cruising.

There’s more to the Oselli Edition than just an engine upgrade – let’s face it, you’d hope so given the price – with a set of chassis revisions designed to finely hone the Mini’s reactions. There’s a set of adjustable Spax dampers along with Enkei 7x13-inch alloys (finished in gold or silver), with those wheels hiding a set of upgraded brakes, too. Up front there are larger-diameter discs clamped by four-piston calipers, while the rear set-up features alloy drums. 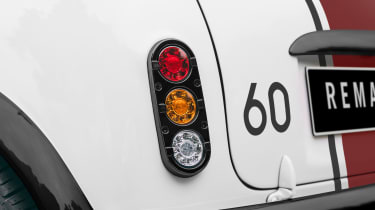 To differentiate the Oselli Edition from the run-of-the-mill Mini Remastered, its styling has been honed to include special hues and other accoutrements. Two colours will be offered – off white or dark grey – and can be accompanied by full-length racing stripes in either crimson, royal blue or racing green. The cast alloy engine cover is colour-coded to the exterior stripe, while exterior brightwork is darkened and includes black arch extensions, mirrors and door handles. A black mesh grille finishes off the package along with a pair of LED spotlights.

Inside there’s a choice of two interior options – either the full four-seater or a two-seat version with a hand-finished roll-cage in the back. This latter option is equipped with hand-trimmed bucket seats and a rear storage compartment, and can also be fitted with four-point Sabelt harnesses. You can even order personalised matching race suits and helmets to go with your Oselli Edition…

Pre-orders for the Oselli Edition are being taken now with the first deliveries expected in 2020. The four-seat model starts at £117,600, while the two-seat version costs from £129,600 (both prices inclusive of VAT). So what are you choosing? An Oselli Edition, or a Cayman GT4 and an Up GTI and £40k in the bank?