The Corvette Stingray runs up the drag strip for the first time, while a shooting brake version could top 200mph 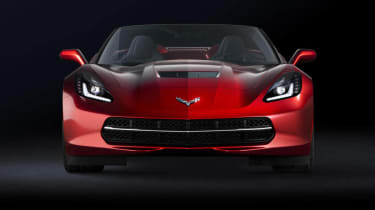 It’s been a good week for the new Corvette Stingray. The first footage of it pounding up a drag strip has surfaced online courtesy of tuning company Hennessey, while Callaway is reported to have rubber-stamped its AeroWagon Corvette shooting brake.

The AeroWagon appears to use the BMW Z3 M Coupe as its design inspiration, with a new, more practical rear end and a dramatic new side profile. The new hatchback is said to be constructed from carbonfibre elements, saving weight, while Callaway has apparently boasted of increased fuel economy and a 200mph-plus top speed, though the latter is likely to require a little extra power on top of the shooting brake’s tweaked aerodynamic profile. A 22,995 US dollar premium over the standard Stingray’s 53,000 dollar base price is quoted.

Less vague are the performance claims from Hennessey following the Corvette Stingray’s first quarter-mile drag-strip run. With its 455bhp/460lb ft 6.2-litre V8 and the optional Z51 performance package (which adds an electronic limited-slip differential, upgraded cooling and aerodynamics and a dry-sump oil system), the ‘Vette completed 0-60 in 4.15sec, 0-100mph in 9.50sec and the quarter mile in 12.23sec, hitting 114.88mph in the process.

The model in question actually has an automatic gearbox (cue interior driving shots in the video below of a fairly relaxed driver, having to do little except pin the throttle) while the footage is a great opportunity to see the new 2014 Corvette Stingray’s electronic speedometer in action. The video appears thanks to Hennessey, the firm behind the twin-turbo Ferrari 458, a 700bhp McLaren 12C and the Hennessey Venom GT, one of the world's fastest cars. It's a less than subtle hint that a Hennessey-tweaked Corvette lies on the horizon.