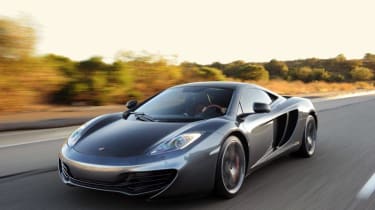 Texan tuner Hennessey has modified the McLaren 12C. The American company behind the Hennessey Venom GT supercar – potentially the world’s fastest – and a multitude of tuned muscle cars, it has boosted the Ferrari 458 rival by nearly 90bhp.

The Hennessey HPE700 sees the 12C’s 3.8-litre twin-turbo V8 engine tweaked from 616 to 704bhp, just short of the 727bhp that McLaren has pushed out of the P1's petrol engine, while torque climbs from 442 to 538lb ft. This enables a performance improvement, 0-60 now taking 2.8sec (down from a claimed 3.1sec) while the quarter mile is completed in 10.3sec at 137mph. There’s no mention of the Hennessey McLaren’s top speed, but expect a small improvement over the standard 12C’s 207mph.

The upgrade comes courtesy of an ECU software upgrade, an intercooler upgrade, new air filters and a stainless steel exhaust system. There are a plethora of HPE700 badges to show off the extra power that lies beneath the (otherwise standard) 12C’s skin, while a one-year, 12,000-mile warranty covers the upgrades.

The 12C can’t trump Hennessey’s Ferrari 458, though. Called the HPE700 Twin-Turbo (just to confuse things with the McLaren), it produces 738bhp. Its 0-60 time matches the 12C, but fall behind by two tenths of a second for the quarter mile, also completed at 137mph.