Following the reveal of the Corvette ZR1 a few weeks ago, Chevrolet has announced an open-top version. 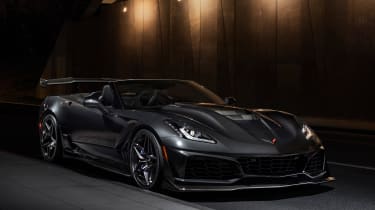 The Chevrolet Corvette ZR1 Convertible will line up alongside the ZR1 coupe when it's launched in 2018. Priced around £93,000 before tax (based on current exchange rates), the drop-top version marks the return of the ZR1 convertible after 48 years - although, like the coupe, it won't be available in the UK through official channels.

Interestingly, only minimal changes were made to the ZR1 coupe to create the convertible version: the seat-belt mounting points have been relocated and a space to stow the hard top canopy has been created. There’s no extra bracing or body-stiffening to compensate for any lost rigidity in the aluminum chassis caused by the removal of the fixed roof. As a result, the convertible’s folding-roof mechanism is the main cause of the 27kg weight gain over the coupe.

“The ZR1 convertible is a no-compromise supercar,” said Corvette Executive Chief Engineer Tadge Juechter. “Thanks to the strong structure, the suspension tuning between coupe and convertible models is identical, meaning the ZR1 convertible offers the same benchmark performance, including a top speed of over 200 mph.”

> Click here to read about the Chevrolet Corvette ZR1 Coupe

The engine of the Corvette ZR1 coupe is carried over in full. As such, under the heavily contoured bonnet is a 6.2-litre supercharged V8 producing 744bhp and 715lb ft of torque. Drive is distributed through seven-speed manual or eight-speed automatic transmissions.

The engine originates from the Z06, which sits a rung below the ZR1 in the Corvette hierarchy, but it has been overhauled with a new supercharger (52 per cent larger), upgraded fuel injection system (combining direct and port injection) and a quartet of extra radiators. The huge performance means the ZR1 Convertible tops out at 212mph and is capable of a sub three-second 0-60mph time.

Like the coupe, the Corvette ZR1 Convertible is offered with two aero packages, the (standard) Low Wing and (optional) High Wing. The latter costs about £2,300 extra, for which you’ll get a front splitter with carbonfibre end plates and Michelin Pilot Sport Cup 2 tyres. There’s also a retuned chassis and a recalibrated magnetic ride control system to make the most of the modifications. The High Wing package generates up to 431kg of downforce without comprising a 200mph-plus top speed.