Chevrolet Corvette ZR1 revealed - the most extreme Corvette yet.

Chevrolet reveals the most powerful Corvette ever in the form of the C7-based ZR1. 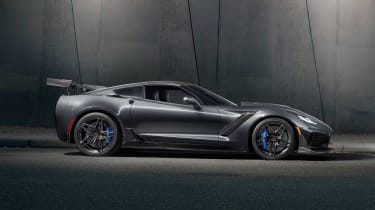 Chevrolet has officially revealed the most powerful production Corvette ever. Prototypes for the new ZR1 have been seen testing in the US and at the Nurburgring during recent months, but it's only now that we have technical details and images of the production-ready car.

Using the current Z06 as a base, Chevrolet has upgraded the 6.2-litre supercharged V8 engine from 641bhp to 744bhp through the use of a new supercharger with 52 per cent more displacement than the Z06’s. Torque is also up to 715lb ft.

In addition to the larger supercharger, Chevrolet has also utilised a new dual-fuel injection system, combining direct and port injection to liberate those huge figures. To help cool the whole system down, previously a cause of reliability issues in the Z06, the ZR1 has gained a further four radiators, bringing the total to a Veyron beating 13, giving you some idea of how highly strung the V8 is in this state of tune. 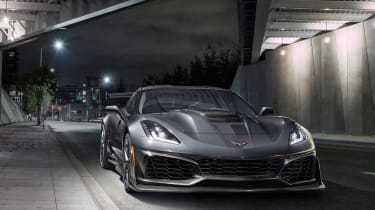 Unlike the previous model ZR1, the engine is no longer hand-built, but Chevrolet insists the modifications made to the engine are substantial enough to warrant a new LT5 engine code. Chevrolet has yet to release official performance figures, although it does stress a top speed of over 210mph.

Like most high-end GM performance cars, the ZR1 will be offered with two distinct aerodynamic packages. Both feature substantial ground-works including a large front splitter and new under-mounted front wing, with the 'low-wing' package generating 70 per cent more downforce than the standard Z06.

> Click here for our review pictures of the week gallery

The ‘high wing’ package adds a corresponding GT3-style rear wing, as well as Michelin Pilot Sport Cup 2 tyres, a re-calibrated suspension tuning and magnetic ride control dampers. This second package has been designed to extract the best lap time possible out of the ZR1, but correspondingly decreases top speed due to the increased drag figure.

The ZR1 has also undergone a thorough redesign, with designers opening up the front fascia to allow for improved cooling, while the massive power bulge bonnet is required to fit the larger supercharger sitting atop the engine. Inside, heavily sculpted bucket seats and plenty of decorative carbonfibre have also been included if that massive bulging bonnet wasn’t enough to remind yourself of the 744bhp underneath it. 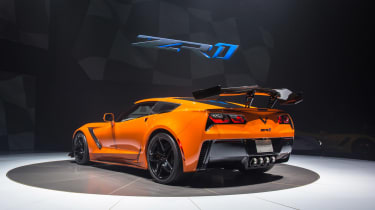 Like the ZR1 Corvettes that have come before, this will be a swansong model for the current generation of Corvette - which has been on sale since 2013. An all-new Corvette is well into its development cycle and it will move the classic small-block V8 behind the driver, making it the first ever mid-engined Corvette. Some may lament the change in engineering philosophy, but GM’s engineers have said that the move has come about due to having reached what they consider to be the limits of front-engined capability.

Due to go on sale in the spring of next year, there are no plans for its official sale in the UK. Oh, and all that development time at the Nurburgring, rumours suggest that it hasn't gone unrewarded. Porsche and its recent GT2 RS 6:47 production car record might be in jeopardy sooner than it might have expected.