The SEAT Ateca’s hot Cupra cousin also freshens up for 2020, and keeps its optional 345bhp Abt power boost 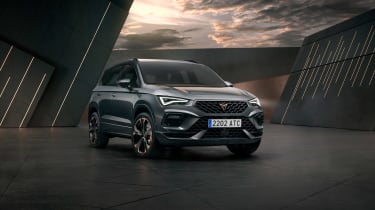 Cupra has revealed its interpretation of the updated Ateca SUV, combining a similar selection of aesthetic and technology updates as its SEAT cousin. The Ateca will join the new Leon and Formentor in Cupra’s expanding range later this year.

Mechanically the new Cupra Ateca hasn’t changed a whole lot, keeping its EA888 four-cylinder turbocharged petrol engine, seven-speed dual-clutch transmission and Haldex all-wheel-drive system. Power remains at 296bhp, backed by 295lb ft of torque, getting the Ateca to 62mph in 4.9sec and taking it on to 153mph. 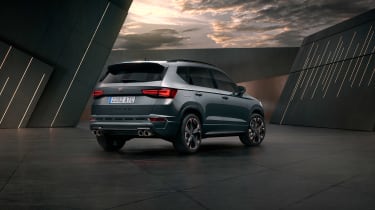 It will continue to be available with the dealer-fitted Abt power pack in the UK, bringing power up to a more substantial 345bhp. The published figures for the current Abt-upgraded Ateca give the impression that its performance is identical to the standard model’s. However, the marked difference on the road between the two would suggest otherwise.

UK-market Cupras are also expected to be available with an optional factory-fitted performance package, upgrading the standard brakes to the more powerful set of Brembos seen on the Ateca Limited Edition model that made its debut back in February. Likewise Cupra’s continued association with exhaust specialist Akrapovic should also yield an upgraded exhaust system. 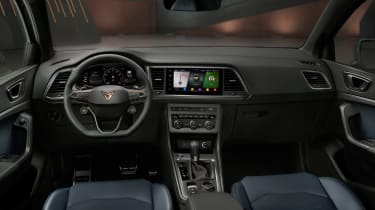 The updated exterior has been broadly designed in conjunction with the standard SEAT model, with more contemporary all-LED lighting units paired to Cupra’s more assertive grille, bumper and wheel designs. A standard 19-inch wheel in either silver or copper will be available, with an upgraded 20-inch option also likely to be offered when UK specifications are released.

Inside, SEAT’s bigger infotainment screen and new interface give the interior a much needed lift, while the new Cupra steering wheel with integrated mode switches gives the driver access to the Ateca’s four driver modes. Adaptive dampers are standard, with the ability to constantly vary the stiffness depending on the road surface and selected mode. Both the electric power steering and throttle mapping are also variable depending on the driver mode, and both have been retuned compared to the previous model.

While the Ateca might be a generation behind the incoming Leon and Formentor, these updates aim to level out the range of a brand that still has a huge amount of potential. As mentioned above, UK-specific prices and specifications will be released closer to its on-sale date in the autumn of this year. 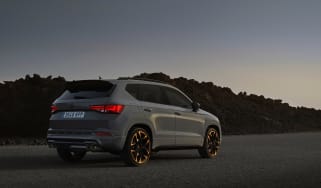