SEAT’s popular SUV to pick up aesthetic and tech updates; Cupra Ateca on its way, too 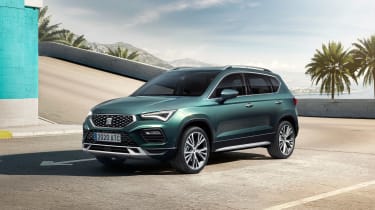 SEAT’s recent boost in popularity could well be attributed to the Ateca, its first SUV model and one that has since been joined by three additional SUV models since its launch in 2016. With a total of 300,000 units sold, the Ateca has rapidly become one of SEAT’s most important models, which is why SEAT’s kept the recipe of this updated model close to that of the original, but with key updates to tech, powertrains and styling.

The aesthetic changes are based around the nose, with more compact LED headlights and a new grille, bumper and trim finishes bringing it closer into line with newer SEAT products. The rear bumper and side skirts have also been redesigned to suit. Ateca models will be available in three design themes – standard trim, pseudo-sporty FR and new rugged Xperience. All have bespoke features, and wheel sizes ranging between 17 and 19 inches. 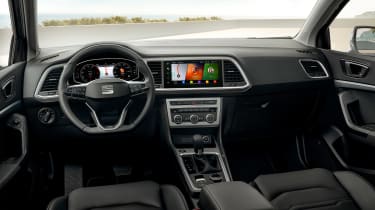 The interior’s overall architecture remains, with the same previous-generation Leon-derived dash layout, but is updated with new trim accents, SEAT’s new steering wheel design and a comprehensive technology update that includes an upgrade to the latest infotainment system accessed via a new high-resolution touchscreen of up to 9.2 inches, as well as an updated 10.25-inch digital cockpit – both standard on mid- to high-specification models.

The powertrains and underlying chassis is much the same as before, which means it shares the Volkswagen Group’s MQB modular platform with the current Volkswagen T-Roc and Skoda Karoq, with the usual range of three- and four-cylinder petrol and diesel engines paired with either a six-speed manual or seven-speed dual-clutch transmission. Most models will be exclusively in front-wheel drive, except the top-specification 2-litre 187bhp petrol and 148bhp diesel which feature a Haldex-style all-wheel-drive system. 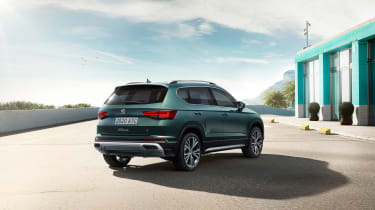 The most potent SEAT Ateca will not be a SEAT at all though, with a new Cupra Ateca expected to follow shortly. This model should, as it does now, increase power to somewhere around 300bhp from its EA888 four-cylinder petrol engine, paired exclusively to a dual-clutch transmission and all-wheel-drive system. It’s unknown at this point whether the new Cupra Ateca will also adopt the same plug-in powertrain from the smaller Formentor and new Cupra Leon.

It might not really be evo’s cup of tea, but the Ateca’s relatively sweet handling balance compared to rivals, and the fact it goes some way to funding the hot Cupra models we’re actually interested in is reason enough for it to be an important model for the Catalonian car maker.