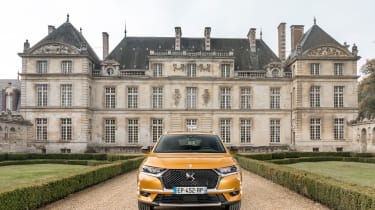 It’s no exaggeration to say that the DS 7 isn’t going to set the world on fire when it comes to its performance figures, even when the 296bhp Hybrid comes on line in 2019. The launch line up comprises three engines, BlueHDi diesels in both 130 and 180 guises as well as a PureTech 225 petrol model. All are four-cylinder units and while they all pass muster as far as emissions and economy figures are concerned they lag behind the competition in performance terms.

For the time being the only petrol model is the PureTech 225 with 222bhp and while its claimed acceleration figure from rest to 62mph of 8.3sec sounds a little bit more like it, a BMW X1 20i with 189bhp covers the same increment in 7.4sec.

On the road the HDi 180 does feel stronger than its vital stats suggest, no doubt assisted by its 295lb ft of torque that’s developed at 2000rpm. Pop it into its Sport mode and the engine feels moderately enthusiastic if a little more gruff than the class-leading 2-litre diesels. Conversely the 225 petrol doesn’t imbibe the same feeling although to be fair to DS, it did say it’s still fine-tuning the transmission software for this model. While it was smooth enough in Normal mode it was far too eager to kick down in Sport, which constantly took the engine out of its torque-rich mid-range.