Our Radical Clubsport may have been stolen, but that didn't stop Roger Green from grabbing another to race. Not without incident, though. Video and picture gallery 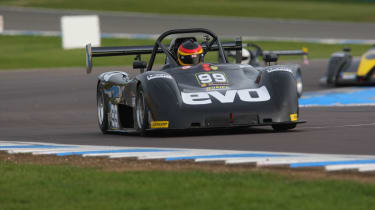 12
The 2011 Radical Clubman season kicked off at Donington Park last month, and we were part of it. Catering predominately for SR3s, it also has classes for PR6 and Clubsports, and it was a PR6 that Roger Green borrowed (following the theft of our own Radical Clubsport).

Subscribe today to have every issue of evo delivered straight to you. You'll SAVE 39% on the shop price, and get evo for its original cover price for a whole year!
Subscribe now
The PR6 is powered by a 1340cc Hyabusa engine tuned to produce 210bhp by Radical’s in-house engine division, RPE. The PR6 weighs just 480kg and thanks to a large rear wing, front splitter, rear diffuser and large Dunlop slicks it can pull 2.3g through the turns. And as Roger proved it also produces very dramatic racing…
See our Radical Clubsport in action here
Read about our unfortunate Radical theft
Join evo's Twitter, Facebook and YouTube pages
Follow us on TwitterFollow us on FacebookEmail us