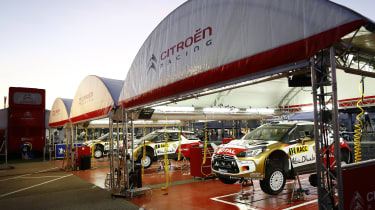 Just 11.3 seconds separated Sébastien Ogier and teammate Jari-Matti Latvala by the end of the 2014 Rally de Espana, but that distance and the points awarded were all Ogier needed to take his second World Rally Championship title.

Following the last rally in France, Latvala closed the gap to his Volkswagen teammate to 27 points, putting the Finn in with a chance at the title with Spain and Wales Rally GB still to run. Ogier though had the upper hand - despite telling reporters he felt 'mentally weak' for part of the 2014 season - and on Spain's mixture of gravel and asphalt the French driver had enough pace to convert his lead into a title.

It also marked Ogier's seventh victory of 2014, and makes him only the fifth driver since 1977 to retain a WRC title - joining Juha Kankkunen, Miki Biasion, Tommi Mäkinen and fellow countryman Sébastien Loeb in the history books.

Kris Meeke's run of bad luck continued in Spain. Despite setting fastest time in the first stage of the event, his Citroën DS3 WRC picked up a puncture after the Brit ran wide on a corner on stage two. After changing to the spare, another front tyre caught a puncture. With his only spare already in use, Meeke couldn't make it back to service and was forced to retire.

The WRC series now heads to the UK for the Wales Rally GB on November 13.