Porsche took victory in the final race of the FIA WEC season at Sao Paulo, Brazil 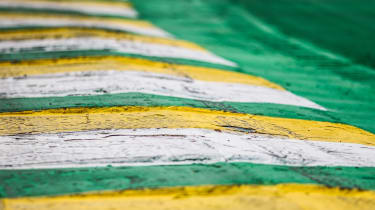 Anthony Davidson and Sébastien Buemi might have sealed the 2014 FIA World Endurance Championship series at the last race in Bahrain, but there was still much to play for in the final round at Sao Paulo.

Romain Dumas, Neel Jani and Marc Lieb had more to concentrate on in the final laps however, pipping Davidson and Buemi's Toyota by just 0.17 seconds in their Porsche 919 Hybrid.

The result is Porsche's first victory in its new hybrid sports car, but Brazil was a race of mixed fortunes for the team. Mark Webber suffered bruising and concussion following a huge accident that left the flaming carcass of his own 919 sitting on the curved final section of the circuit.

'I’ve got no recollection of the accident or how it happened,' he told reporters as he recovered in hospital, but the Aussie is already looking forward to 2015 - buoyed by his teammates' victory.

The GT class has also provided some fantastic battles in 2014, and it too featured three different cars on the podium - led by the Aston Martin V8 Vantage of Darren Turner and Stefan Mücke.

Keep your eyes peeled on evo for Anthony Davidson's final thoughts of the 2014 season. The 2015 FIA WEC begins once again on April 12, 2015, at Silverstone.