The third round and a third different winner in Formula E, as Sebastien Buemi seals victory in Uraguay 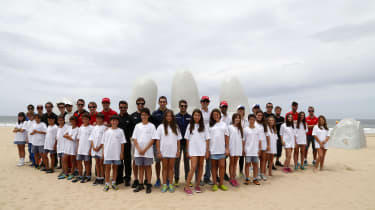 Sebastien Buemi illustrated the unpredictability of a series using identical cars by becoming the third winner in three races to take a Formula E victory.

The new series has at times returned messy racing and its street circuit format means mistakes are punished harshly, but Buemi kept his nose clean to take his first victory and second podium of the year.

Ex-F1 driver Jean-Eric Vergne almost spoiled Buemi's fun as his Fan Boost-assisted start put him briefly in the lead, but contact with a kerb early in the race resulted in his eventual retirement. He's sure to be a feature throughout the rest of the season though, benefitting from both the Fan Boost and speed that saw him take pole position for the Andretti team.

Nelson Piquet Jr. and Lucas di Grassi took the second and third podium spots for China Racing and Audi Sport ABT respectively, while Jarno Trulli ended his run of poor luck with a fourth place in the car bearing his name. Di Grassi's points ensure he retains the championship lead.

By contrast, British racer Sam Bird couldn't follow up his victory in Putrajaya - he locked up and hit a kerb on lap three, putting him into the barriers. Bird now ties with Buemi on 40 points, 18 behind di Grassi.

10,000 spectators filled the grandstands in Punta del Este and many more cheered from trackside balconies, illustrating one major benefit of the Formula E series: accessibility.

That's sure to continue as the series moves to Buenos Aires in Argentina on January 10 - a city not visited by Formula 1 since 1998.