Mini and Al-Attiyah take victory on the 2015 Dakar rally: Pictures

Mini takes its fourth straight victory on the Dakar, but the event is marred by another death 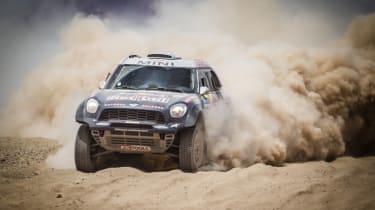 Mini has continued its string of success at the Dakar, with Nasser Al-Attiyah taking the brand’s fourth consecutive win in the ‘car’ class on the world’s toughest rally.

Along the way, the Michelin-shod, Red Bull-sponsored Mini ALL4 Racing took eleven of the 13 legs on this year’s event, which started in Buenos Aires in Argentina, passing through Iquique in Chile and Uyuni in Bolivia.

Elevations reached as high as 4500m in Bolivia, while other stages passed through the arid Atacama Desert in Chile. Overall, competitors cover more than 9000km (around 5600 miles) during the event. 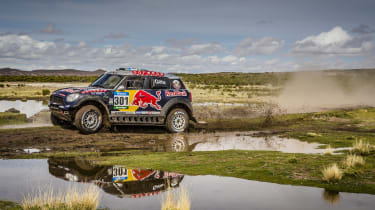 Sadly, the third stage of the Dakar was marred by the death of Polish motorcycle competitor Michal Hernik. The cause of death has not yet been confirmed, as the rider showed no signs of being involved in an accident.

Hernik’s death highlights just how dangerous the Dakar can be, given the vast expanses of land covered, the lack of a dedicated route through deserts and mountains and the heat encountered on the way.

Despite these challenges, Mini’s ALL4 Racing has proved itself more than up to the task in recent years, taking victory every year since 2012.

For Al-Attiyah, from Qatar, the win validates his comments on last year’s rally, on which he scored a podium but didn’t quite reach the top step.

‘I promised last year when I was on the podium that I'd be back to win, and now I'm here’ he said.

‘It was very hard to lead the race from the very beginning and to continue keeping this position on the long distance…I'm very happy about this great result and I want to thank and congratulate all mechanics and the team for the great job they have done during the two weeks.’ 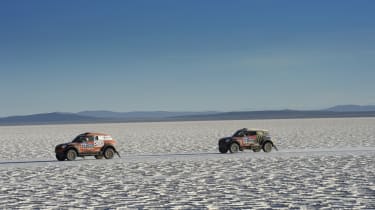 Second and third spots were taken by Giniel de Villiers in a Toyota Hilux pickup, and Krzysztof Holowczyc in another Mini.

Airat Maradeev from Russia took victory in the Truck class in a Kamaz, Marc Coma from Spain brought his KTM home in first place in the Bike class and Pole Rafal Sonik’s Raptor 700 Yamaha carried him to first place of the Quad competitors.

Click through our gallery for images of the winning Mini ALL4 Racing on some of the world’s toughest rally stages.