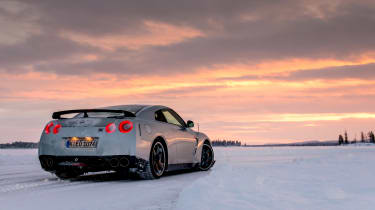 A visit into the snowbank and ten minutes spent digging out your stricken vehicle is presumably a common part of ice driving experiences.

Driving across a frozen lake in Lapland in Nissan’s new Juke Nismo RS, 370Z Nismo and GT-R, I've already passed a couple of vehicles nose-deep in the snow. And given a couple more minutes of arm-twirling, it's my turn to join them.

Struggling to get to grips with the handling of the all-wheel drive, torque-vectored Juke on the icy surface, I’ve misjudged power and steering application out of a hairpin and I'm now sliding inexorably towards a snowbank on the exit of the corner.

In a last-ditch attempt to correct the slide I brake hard and spin the wheel fruitlessly to the right, but the car has already chosen its trajectory. With the snow bank fast approaching and collision now imminent, I clog the right-hand pedal to the bulkhead ready to forge my way through and back to clear ice, but it’s already too late. The windscreen goes white, the Juke is vacuumed further into the snow and the car finally grinds to a silent halt.

My instructor, a French ex-rally driver known only as Bob, simply sighs. He opens the door and lifts a shovel from the Juke’s boot. An arctic draught pervades the cabin, still marginally less icy than the stare I’ll receive if I don’t grab the second shovel and help him extricate our beached vehicle. 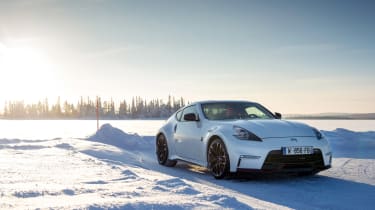 Despite my faux pas, the Laponie Ice Driving Experience is still a hugely rewarding and utterly unique way of learning car control skills.

The first thing I learn is that studded tyres offer completely alien levels of traction, cornering force and braking grip. If you're more familiar with the sickeningly slow rate of deceleration achieved by regular tyres on snow and ice, the studs' effect is astounding. You can stop at junctions, and then simply pull away again, with little more thought than you'd apply to doing the same on a wet road. Up the pace and more care is required – particularly as our fleet of Nissans have all had their ABS disabled - but the friction 'twixt studs and ice soon brings the car to a halt.

I'd expected the tyres' limits to be pulled into sharp focus by the only rear-wheel drive car of the group – the 339bhp, 274lb ft Nissan 370Z Nismo. A handful? Quite the opposite, in reality. The 370Z only serves to illustrate the reasons we love rear-wheel drive in the first place – just at a manageable speed, and in beautiful slow motion.

With no ABS, traction control or stability control systems every input you make translates directly into movement. The 370 is beautifully balanced on the ice, turning into corners with virtually no effort, responding predictably to brushes of the brake pedal and carving majestic arcs with the rear wheels with measured inputs of the throttle. 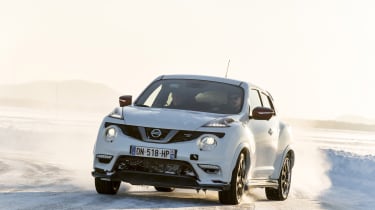 Cornering angle is directly proportional to the pressure applied by your right foot, but the low-grip surface means you need only a fraction of the commitment you might on even a streaming wet road. It’s akin to driving around a classic car on crossplies – cornering speeds may be low, but this only means that slides can be experienced at a sane, manageable velocity.

There's an unusual videogame feel to the whole experience. The ease at which cars break into slides, and the time you have to correct them, is much more like drifting around in the virtual world than anything you'll experience on your commute. With much more gaming experience under my belt than real-world track driving, I was surprised by how simple I found it to pitch the 370Z into a slide, hold it, then use weight transfer to transition into a long drift in the opposite direction.

Familiar sensations of feedback still creep through the steering wheel, but on low-grip ice the forces are lower. One needs to be fast with corrections, particularly when an over-enthusiastic dab of the throttle breaks traction so easily, but with light steering and much lower g-forces in cornering, the whole exercise is less exhausting than wrestling a powerful car around at speed in the dry.

You feel kinder on the car, too - not least because tyre squeal and clouds of acrid smoke are absent. In fact, the car sounds little different when sliding than it does driving in a straight line. 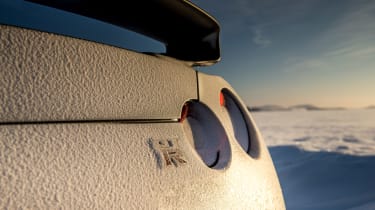 Unfortunately, Bob wasn’t there to experience my balletic, Jethro Bovingdon-style slides in the Z.

As a result, he still gave me a wary look when I climbed into the GT-R’s hot-seat later in the day. It was a suspicious gaze that wondered when – and just how quickly – I might spear off into the snow in a few minutes’ time.

Thankfully, we never got to use the GT-R’s shovels. With several laps of an icy 1:1-scale Silverstone under my belt and the GT-R’s flattering handling characteristics, I powered around without so much as brushing a snowbank. Luffield was taken in a long, satisfying drift every lap, Becketts with a quarter-turn of corrective lock at more than 70mph.

Bob doesn’t speak much, but when he does, his words are simple. ‘Very nice’, he says occasionally in his French drawl. Ten minutes later, our positions in the car are reversed. Taking the same corners at roughly double the speed, and perpendicular to the track’s direction, I suspect he was just being kind…

Laponie Ice Driving’s a la carte experiences start at 1140 Euros (including VAT). Two-day packages including experiences in the Porsche Boxster and Porsche 997 GT3 begin at 3180 Euros, with an accommodation pack starting at another 1155 Euros.