Aston Martin at Bonhams - the most exciting cars sold 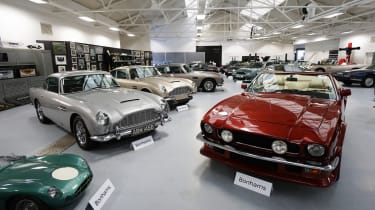 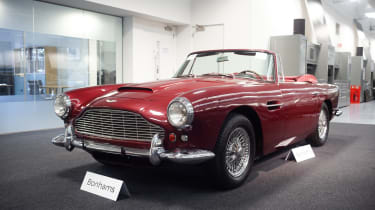 It’s hard not to see the ex-Sir Peter Ustinov DB4 Vantage Convertible as the star lot at the annual Bonhams auction, held, as usual, within the Newport Pagnell Works. The Academy Award-winning actor, playright and diplomat had his DB4 – in LHD spec for continental cruising – delivered to him at the Montreux Palance Hotel, Switzerland, in July 1962.

Not really being a fan of the current Royal Claret paint, I was reassured to see that Ustinov originally ordered ‘911 CGT’ in Desert White with red leather interior trim – very suave – along with extras such as a hardtop and an oil cooler. In the same ownership since 1984, it made an eye-watering £1,513,500. 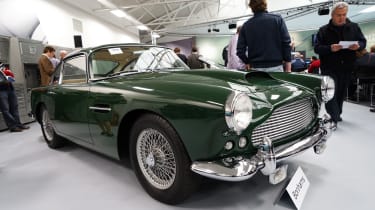 So many DB-Series Astons were up for auction at Newport Pagnell that it was possible to develop a kind of DB-blindness. Almost. But even amongst the ranks of these delectable GTs, the 1961 DB4 in Deep Carriage Green stood out. It was impossible to ignore a paint finish that simply danced in the light, with a depth of colour – a ‘greenness’ for want of a better word – that the human eye struggled to take in.

Originally delivered to New York, the car has spent more recent years in Norway. It was restored at Aston Martin Works in 2004 ‘without regard to cost’, which is enough to make one’s wallet shrivel up just at the thought of it. 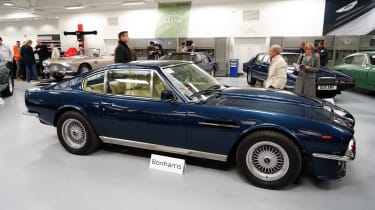 Who doesn’t like the original Aston Martin V8 Vantage? This prime cut of British Beef strikes a delicate balance between aristocratic style and earthy menace. Here in 1980 ‘Series 2’ form, this Vantage has the fruitier X-Pack engine, with around 430bhp delivered via gulping 48IDF Weber carbs.

Undeniably a handful to drive quickly, the Vantage also owned the title of World’s Fastest Accelerating Production Car for a time, with 0-60mph in this form probably measured in around five-seconds. For a weighty goliath of mobile wood and leather that’s quite some going. 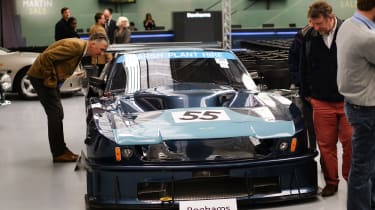 An Aston Martin V8 with a flat underfloor and a sequential gearbox? That’s ‘Evo 4’, the last of the Astons developed by the famous Marsh Plant Racing Team. Although Geoffrey Marsh’s team campaigned a variety of machinery since its inception in 1976, it’s the Aston Martin marque that it is most closely associated with.

This final V8, debuted in 1999 and with aerodynamic input from F1 engineer Jock Clear, was raced by the late Gerry Marshal and Antony Reid. Despite being an awesome hybrid of old fashioned Aston Martin heft and contemporary racing technology, it failed to sell on the day of the auction. 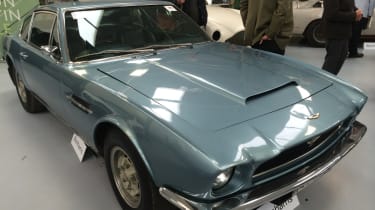 Tucked away in a hall of less rarefied Aston Martin offerings, this early, 1972-example of the original post-DBS V8 had the battle scars and wear – or is that patina – of an Aston almost attainable to mere mortals. That it’s also a manual gearbox car is enough to get petrolhead dreamers everywhere frantically convincing themselves that re-commissioning a V8 like this one, that’s been dry stored for 26 years, won’t cost them several body parts and the roof over their heads.

Originally gold, there were apparently no faults other than non-working air conditioning when it was parked all those years ago. Scant comfort, perhaps. It sold on the day for £50,600.