The three-quarter-mile wet handling circuit at Vizzola is roughly a figure of eight in shape, with a mix of tight chicanes and medium-speed bends. A sprinkler system keeps it covered in a layer of standing water rather than it just being a bit damp, but nonetheless it’s surprising just how much bite a good set of tyres can find through the water. By removing the correct fuse we fully disabled the GTI’s stability control system but kept the ABS on.

There were two corners in particular that revealed a great deal about the relative merits of each set of tyres: a tight left-hander with a demon downhill approach that demands effective braking performance, and a more open right-hander that only the very best tyres could hold a tight line through. I completed six laps in each car, taking an average lap time from the run. We used a reference tyre three times throughout the test – at the start, in the middle and at the end – in order to monitor the evolution of both the circuit and me. The times were then adjusted accordingly to ensure they were directly comparable.

As well as recording lap times using the circuit’s in-built timing loop, I also rated each tyre in subjective terms for turn-in, mid-corner grip, traction, steering feel, confidence and braking. Reassuringly, the correlation between subjective and objective rankings was strong, with two exceptions. The Dunlop scored well for traction and braking, so it ranked second overall in subjective terms, but its lap time was only the seventh fastest because the tyre lacked mid-corner grip. The Goodyear, meanwhile, set the fourth fastest time but ranked down in seventh in subjective terms; I had to brake much earlier on the Goodyear to shed enough speed to make the slower corners. 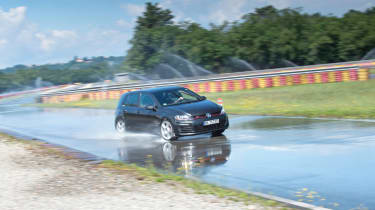 The best tyre, however – and by no small margin – was the Continental. It would carry much more speed into corners than many of the others, hold a tighter line in the long corners, resist wheelspin very effectively and allow me to brake later with less ABS intervention.

In contrast, the Toyo was treacherous. Its best lap time was some seven seconds down on the benchmark set by the Continental and it was the only tyre to consistently fail to slow the car sufficiently for the tight left with the downhill approach. It would also trip into understeer in the long corners. The Pirelli, meanwhile, performed well in both subjective and objective terms, setting the second quickest lap time, while the Yokohama also performed strongly to finish third overall in both rankings.

Vizzola’s 40-metre-radius steering pad was a useful indicator of outright lateral grip. I completed six laps on each tyre and we took an average lap time from the run – this was an objective test only. The technique involved accelerating to a point where the car would no longer hold a line, then dropping back a touch and maintaining a steady speed. As well as being a good test for the tyres it was demanding on both car and driver; during a sustained run the GTI would eventually cry enough and cut engine power, while my breakfast threatened to make a reappearance on more than one occasion.