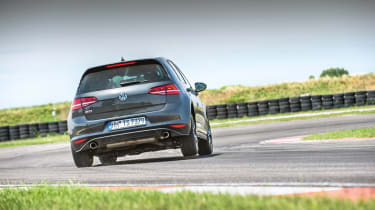 Finishing last in nine of the 12 tests, it’s little surprise the Toyo ranks tenth overall. In previous years we’ve included budget tyres that have performed woefully; the Toyo shouldn’t be considered in those terms, but it does fall short of very strong competition. It is the cheapest tyre here, however.

The Bridgestone didn’t perform badly in the dry tests, but during the wet handling tests it did feel very short on grip and traction. On the road route it also had a sharper edge over ridges than most.

A strong showing in the wet tests wasn’t enough to earn the Michelin a decent overall result. In the dry handling tests it was markedly down on mid-corner grip compared to the best tyres. It scored its only victory in the curved aquaplaning test.

Let down by its performance in the wet tests, the Hankook ranks seventh overall. It was competitive in the dry, although it beat only the Toyo in dry braking. It won the subjective road route test, though.

The Dunlop performed consistently throughout to score a respectable result. A second place in the straight-line aquaplaning test stood out, but points were lost in both the wet and dry handling tests for traction levels, which were short of the best.

The Vredestein shared first place with the Yokohama for its dry lap time. In fact it performed well throughout the dry tests, but a mediocre showing in the wet denied it a stronger overall result. Its braking performance was particularly disappointing: it finished eighth in both the wet and dry.

The Goodyear is a very strong all-rounder – it finished third overall in the objective dry tests and matched that in the wet. Its performance throughout was more than respectable, but ultimately it was denied a podium position by a slim margin.

Having narrowly bettered the Goodyear in the final reckoning, the Pirelli scores the first of the podium places. Its one victory came in the wet braking test, although it also performed well in the dry. Only the Vredestein and Yokohama set a quicker time around the dry handling circuit and it was competitive in the wet, too.

The margin between the top two tyres in the final reckonings couldn’t have been narrower. Ultimately the Yokohama gives best to the Continental because it didn’t back up its exemplary dry-weather performance with really competitive wet-weather ability. If you leave your car firmly in the garage when it rains, the Yokohama is your winner.

The Continental managed to pull off a remarkable trick by performing superbly in both the wet and the dry tests. Tyres are typically best suited to one or the other, but the Continental proved its unparalleled breadth of ability. It wasn’t the quickest tyre around a dry lap, but nonetheless it is the winner of evo’s 2015 summer tyre test. 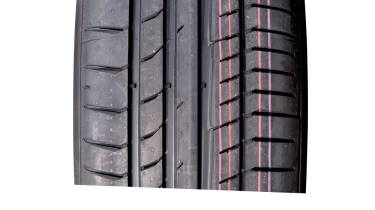