The dry braking test was conducted from 100kph (62mph) and the wet test from 80kph (50mph). This was an objective assessment only, based purely on stopping distances. Generally the correlation between dry and wet results was strong, although, notably, the Dunlop ranked fourth in dry braking, but only seventh in the wet test.

The Continental, Pirelli and Goodyear emerged as joint victors. Despite the Continental’s overall superiority in other wet tests (wet handling, aquaplaning, etc), it finished behind both the Pirelli and the Goodyear in the wet braking test. It did, however, win the dry braking test. Conversely, the Pirelli finished first in the wet and third in the dry, just behind the Goodyear.

Curiously, the Vredestein – which generally performed strongly throughout the various tests – managed only eighth in both the wet and dry braking assessments. The Toyo brought up the rear in both tests.

A tyre’s rolling resistance indicates the amount of energy that is required to roll it along the road. High rolling resistance equals reduced fuel economy. This particular test counts for only a very small amount in our final reckoning as we’re much more concerned with outright performance, but for the record the Goodyear scored its only victory here, while the Yokohama ranked in last position. 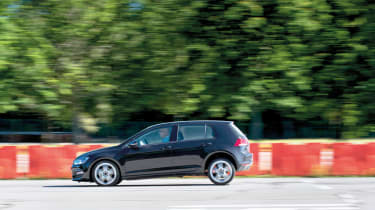 If you’ve ever hit standing water on a motorway and felt your car twitch, the steering go light and your heart rate rocket, you’ll understand the importance of this test.

A tyre aquaplanes when it meets more water than its channels can clear at the given velocity. We tested aquaplaning performance both in a straight line and around a gentle curve, with a water depth of 7mm.

The Continental performed best in a straight line, but it was beaten by the Michelin in the curved test. Curiously, however, the Michelin actually ranked last in the straight-line test, behind even the Toyo, which did lose the curved aquaplaning test. 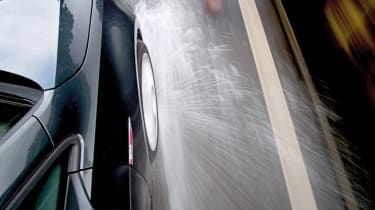