Circuito Tazio Nuvolari folds tightly in on itself to pack a surprising mileage into a very small plot of land. It’s used primarily for motorcycle racing and car testing, but it’s also a good venue for testing a tyre’s dry handling properties.

It’s worth noting that our tyres do not bill themselves as trackday rubber, but a controlled environment such as this is the only way to test tyre performance in a safe and repeatable manner. We took an average time from two laps with each tyre and rated them subjectively and against the clock.

The first corner is an endless right-hander after a 700-metre straight, which made it a stern test of turn-in grip and outright lateral grip, too. The numerous tight hairpins put the traction of each different tyre model under scrutiny, while the fast left-right sweeper was a good test of transient stability and mid-corner grip – the best tyres enabled me to drive through here without lifting.

First up was the Bridgestone, which seemed to return slightly better turn-in and mid-corner grip than the reference tyre. This was borne out by it going two-tenths quicker. However, the Continental was two-tenths quicker still, which is pretty impressive given that it dominated the wet handling tests. It also scored well for steering feel and turn-in.

Lap times would continue to fall, with the Dunlop setting the quickest time so far on its first lap. Steering feel was lacking, though, and the tyre went off markedly during its second lap, dropping it below the Bridgestone on the two-lap average. The Goodyear went even faster still, but it also sustained that performance into the second lap, dropping just a tenth of a second compared to lap one.

The Hankook couldn’t match the Goodyear or Continental’s times, but it was quicker than the Bridgestone. It scored well for mid-corner grip and confidence, but the traction levels fell dramatically during the second lap. 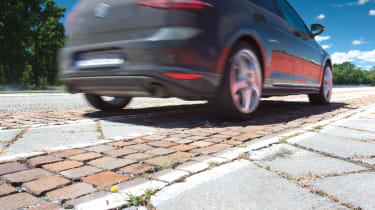 A lack of outright lateral grip saw the Michelin set the slowest time so far (only one tyre would go slower still) and I had to be patient before reapplying the power, but turn-in grip was reasonable. Stepping directly from the Michelin to the Pirelli was instructive – the latter returned very good traction and turn-in and lateral grip to set the quickest time so far. I also scored it highly for steering feel and confidence.

Slowest of the bunch was the Toyo. Initial turn-in response was good, but mid-corner grip levels were poor and traction weak. The car also felt unsettled in the quick left-right sweeper, and the Toyo’s sidewalls were very heavily worn after just two laps. It ranked last in subjective terms, too.

The Yokohama and the Vredestein were the only two tyres to take the quick sequence flat out and both came within hundredths of a second of matching their initial lap times on the second lap. They were the only tyres that felt really cut out for circuit driving and I rated them first and second in subjective terms respectively. 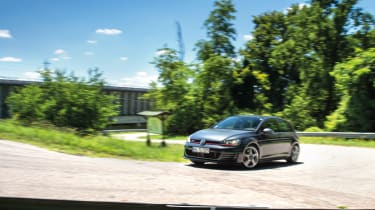 The road route was an entirely subjective test, scoring each tyre for noise and comfort. In fact, I actually used Vizzola’s various surface strips – smooth asphalt, concrete and cobbles – to compare each tyre’s noise suppression properties because I could be certain of consistency for each run. I drove over the strips twice on each tyre, once at 60kph (37mph) and again at 100kph (62mph), and then used the public roads around Vizzola to consider ride comfort. It is worth noting that the differences between the tyres were marginal for both comfort and noise, so no one tyre either really excelled or bombed in this test.

Nonetheless, the Hankook did come out on top in both assessments, scoring highly for noise suppression and for its relaxed and well-damped ride quality. The Goodyear, Pirelli, Vredestein and Yokohama all finished fractionally behind the Hankook. I noted that the Goodyear’s ride quality improved markedly as the speeds rose, that the Vredestein’s noise suppression was good at motorway speeds apart from a high-pitched pinging sound over drain covers, and that the Yokohama made a dull thudding noise over such intrusions.

The Dunlop finished second to last in this test, mostly due to its sharp ride over ridges. However, it was the Toyo that came in last, due to its unsettled ride quality, a boominess over rougher surfaces and the curious ringing sound it made over drain covers.