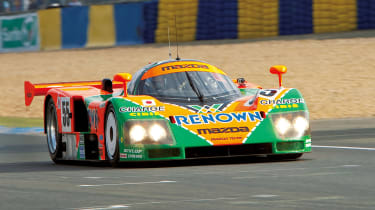 We all know about opinions – everyone’s got one etcetera – but there’s perhaps nothing quite as divisive in the automotive world as the rotary engine. Aficionados will wax lyrical about their inherent smoothness and glorious revability, while everyone else will mutter something about rotor tips, NSU Ro80s and replacement engines. But where lies the truth? Was the rotary engine a motoring dead end, or should it have been given another chance?

The rotary engine was the brainchild of German engineer Felix Wankel – hence why it’s also often referred to as the Wankel rotary – who was granted a patent for this new type of internal combustion engine in 1929. However, it wasn’t until after the Second World War that further development began in earnest at NSU, with Wankel developing one engine, while a second, constructed under the leadership of Hanns Dieter Paschke, would eventually be adopted as the blueprint of the modern rotary engine.

In the early 1960s Mazda and NSU joined forces to further develop the rotary engine and had a quasi-official race to see who could bring a rotary-engined car to production first. NSU won with the debut of the NSU Spider, which it followed up with the (in)famous Ro80. Mazda, meanwhile, might have been the tortoise to NSU’s hare, but its engine was better resolved in some respects, and it was Mazda that went on to produce several rotary-engined production cars, in particular generations of RX models.

How does it work?

Just about the only element a rotary engine shares with a traditional petrol unit is that it uses the same four stages – intake, compression, ignition and exhaust – but this process is not taken care of by cylinders and pistons in the traditional sense. In a rotary engine the typical Otto cycle takes place in an oval-shaped chamber in which a triangular rotor rotates, effectively taking the place of the pistons in a traditional engine.

For those of you old enough to remember what a Spirograph drawing set looked like, that very much sums up the look of the rotor’s movement within its housing. As the rotor travels around the chamber it expands and contracts the gases contained within, drawing air into the chamber and expelling the exhaust gases. Running through the centre of the rotor is an output shaft which is linked via a set of planetary gears to keep the rotor tips in contact with the walls of the ‘cylinder’, while an eccentric shaft delivers power to the flywheel. 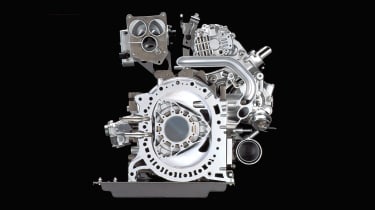 The intake phase starts as the tip of the rotor moves past the intake port – there’s no need for valves here, the intake and exhaust ports are always open – and as the size of the chamber increases the fuel/air mixture is drawn in, and as the next rotor tip passes the intake the chamber is sealed, allowing for the next stage to take place. As the rotor travels round, the chamber that contains the fuel/air mixture becomes smaller, compressing the mixture, which then allows combustion to start with the introduction of a spark from traditional spark plugs.

Two plugs are generally fitted to a rotary engine, as due to the shape of the combustion chamber the resulting flame would take too long to travel within the chamber, resulting in too many unburned gases. Once the rotor tip passes the exhaust port the spent gases are expelled, completing the cycle.

What are the benefits?

So that’s a brief outline of the theory, but where’s the improvement over a traditional combustion engine? Firstly, there are far fewer moving parts, with no camshafts and valves to worry about. Secondly, as the rotor and associated shafts are all working in the same circular motion, the rotary engine tends to be far smoother than a traditional engine with its reciprocating movement.

And while the rotor goes through the same four-stroke cycle as a traditional engine, each of the three lobes of the rotor is going through this process continually, so there are effectively three power strokes for each revolution of the motor. Thus rotary engines tend to have high specific outputs – the 1-litre engine in the NSU Ro80 produced 114bhp; hugely impressive back at the tail end of the 1960s.

As rotary engines are very compact by design the physical size of the engine is significantly smaller than a traditional combustion engine, leading to obvious benefits with weight saving and packaging, too. 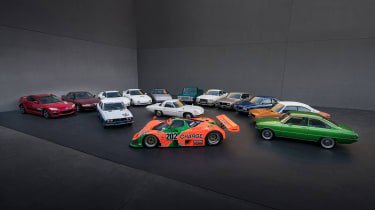 Unfortunately, plenty. Initially NSU had a problem with the design of its rotor tips which either allowed the tips to lose contact with the sides of the chamber or damage the chamber walls, leading to lots of warranty claims and replacement engines. It was financially so crippling that NSU was eventually taken over by Audi. While Mazda did a better job of solving the problem of the rotor tips, generally speaking a rotary engine is not as durable as a conventional unit, leading to rebuilds being needed earlier in a car’s life than one with a conventional engine.

A rotary engine also isn’t very fuel efficient and scores poorly in emissions tests. Even with two plugs providing the spark for combustion, the shape and size of the combustion chamber does mean that a significant amount of unburnt fuel leaves through the exhaust port, making a rotary-engined vehicle thirstier than one with a conventional engine. A far better proposition would be a rotary engine running on hydrogen, as its significantly more volatile nature would lead to no unburnt fuel escaping.

To make matters worse, rotary engines need their rotor chambers to be lubricated with oil, and even with precise injection of very small amounts to keep the rotors from damaging the chamber walls it’s inevitable that some of this lubricant will be ejected with the exhaust gasses, adding to their emission woes.

Despite their problems, rotary engines are often tipped for a comeback, especially by Mazda, the main supporter of their virtues. There was the RX-Vision concept revealed at Tokyo back in 2015, but a production version never materialised, and while there’s been talk of a rotary engine being used as a range extender for electric vehicles by several manufacturers (including, unsurprisingly, Mazda) as yet there haven’t been any production models.

For the time being we’ll have to enjoy those rotary engines from the past. Here are our top five. 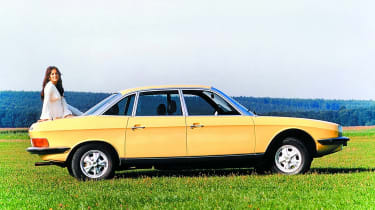 While those of a younger persuasion will almost certainly think of a Mazda when asked about a rotary-engined machine, for those of a certain age the NSU Ro80 will be the first car that comes to mind. And for all the wrong reasons. Most won’t remember its advanced design, its use of discs all round, or its 114bhp output from just one litre of capacity.

No, most will remember burnt out rotor tips, engine rebuilds at 30k miles and a reputation for chronic unreliability. It’ll be an unfair footnote in the rotary engine’s history books – it was a great car to drive and in many ways a decade before its time. Yes, early on it did have its engine problems, but these were resolved during its lifetime. It was too late for NSU though, and despite a ten-year production run just 37,398 examples were produced, and the financial burden of the car hastened NSU’s untimely demise. 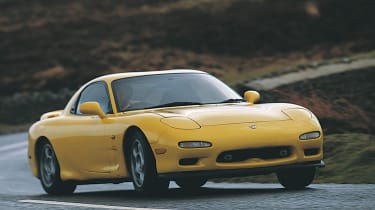 Despite having a capacity of just 1.3 litres, the Mk3 Mazda RX-7 was good for 252bhp, thanks in no small part to twin-turbochargers, and with a skinny 1218kg kerb weight it was endowed with 210bhp per ton. The small engine was mounted right up next to the bulkhead for a front-mid-engined configuration – it was exceptionally agile and made it a rewarding driver’s car.

With starring roles in many racing games such as Need for Speed and Grid, the car remained famous long after production ceased in 2002. Today, the car is remembered as a cult hero. And though it’s true that the RX-7’s rotary engine can need a rebuild in as little as 60,000 miles (worn rotor tips are the main cause), a well-looked-after RX-7 certainly makes for an enticing prospect. 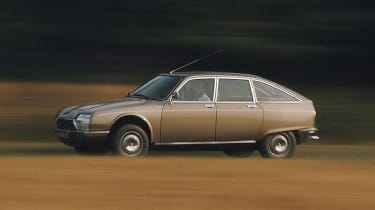 A classic case of right car, wrong time? We’ll never really know, but the Citroën GS Birotor was based on the popular GS, and with its 995cc engine developing 106bhp it should have been a suitable range-topping model. As well as being swifter than the regular GS, it was a higher quality product, with disc brakes all round and a more luxurious interior.

But like all rotary-engined cars, it had a tragic thirst for fuel, and its October 1973 launch unfortunately coincided with the 1973 oil crisis. Fuel prices rocketed and buyers kept away, opting for more fuel-efficient machinery instead. Just 847 were sold before Citroën pulled the plug, even going as far as trying to buy back all the examples it had already delivered. As a result, very few GS Birotors survive today. 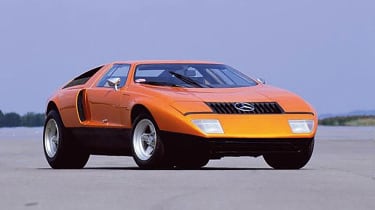 While it was only ever intended to be a research project, the Mercedes C111 must be right up there towards the top of the list of concepts we wish had been built. Bruno Sacco’s futuristic styling was sublime – no doubt helped by its wonderful orange hue – but perhaps what is often forgotten is that two examples were made with rotary engines.

The C111-I of 1969 had a three-rotor Wankel engine with 276bhp, while the C111-II of 1970 featured a four-rotor engine with 345bhp, giving them top speeds of 168 and 186mph respectively, while the C111-II had a 0-62mph time of just 4.9sec. However, even Mercedes’ engineers couldn’t make it work properly, citing reliability and durability issues and potential problems passing US emissions regulations.

The Group C era spawned some wonderful machinery, perhaps none finer than the only non-piston-engined car to win at Le Mans – Mazda’s 787B. The car’s 2.6-litre four-rotor unit produced 697bhp at 9000rpm and 448lb ft of torque at 6500rpm in race trim (Mazda claims 845bhp could be produced in qualifying spec), ensuring the engine’s power-to-weight ratio was substantially better than those of its larger-engined competitors.

Even so, rivals such as Mercedes’ twin-turbo V8 C11 were faster over one lap. But interestingly, the 787B’s naturally aspirated rotary unit bucked the trend set elsewhere in this list by being remarkably reliable. This enabled it to beat all odds and win the 1991 Le Mans 24 Hours, driven by Johnny Herbert, Volker Weidler and Bertrand Gachot. Subsequently, rotary-engined cars were banned at La Sarthe, but the 1991 win demonstrated that when properly developed, a rotary engine could compete with, and beat, the best piston-propelled machinery.