Action-packed Putrajaya ePrix shows how exciting Formula E can be

Malaysia had all the makings of a great motor race 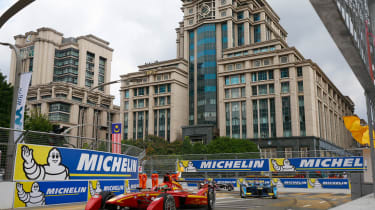 Round two of the 2015-2016 Formula E championship took place in Malaysia at the Putrajaya ePrix. The race provided fans with plenty of wheel-to-wheel racing, late lunges, accidents, mechanical failures, drama, winners and losers – pretty much all the ingredients of a great motor race were included.

The race was an immense challenge for both car and driver, and it reminded us of just how exciting single-seater racing can be. Below, we look back on the eventful ePrix and consider its effects on the championship. 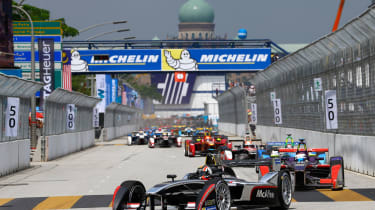 Malaysia was probably the toughest running the teams’ new electric motors had faced yet. Sweltering heat meant that ambient temperatures were well above 30 degree Celsius, and track temperatures were in excess of 50 degree Celsius – a massive challenge for the cars’ Michelin tyres. So influential was the heat that Di Grassi conceded his win was largely down to effective temperature management.

Malaysia also offered other unique challenges, which affected both motors and tyres. Serge Grisin, Michelin’s Formula E programme manager, explained: ‘We faced a challenging combination of difficult weather, a dirty track and asphalt which offered little grip in places. But thanks to the information we brought back from Malaysia last year, we knew that the Michelin Pilot Sport EV would be a match for this cocktail.’ 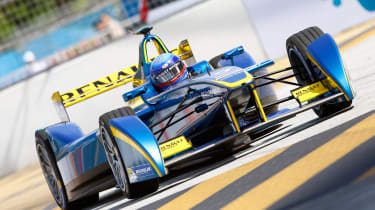 The tyres might have performed consistently, but the slippery track conditions certainly caught drivers out. Nick Heidfeld held on to what had to be one of the biggest slides ever attempted in a Formula E car. His heart-in-mouth moment ended with a light brush of the barriers – he lost a place but survived to race on.

Others weren’t so lucky in the race, with early leader Sébastien Buemi suffering a mechanical gremlin; António Félix da Costa suffered a similar fate towards the race’s end. But between the breakdowns, slides and occasional crashes, there was also genuine, wheel-to-wheel racing.

The strength of the Michelin tyre ensured that drivers could focus on racing rather than management, and the results were lots of late braking manoeuvres, lunges into hairpins and high-speed place changes. Like race one of the season, entertainment was certainly not lacking at the Putrajaya ePrix. 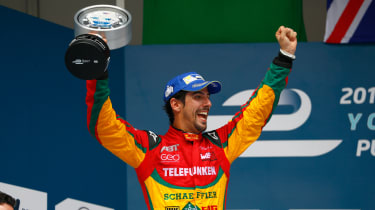 The Formula E circus next heads to Punta Del Este in Uruguay for round three of the 2015/2016 series on the 19th December. Di Grassi leads the championship with 43 points, eight clear of second placed Buemi and 19 ahead of Sam Bird in third. Last year’s title winner, Nelson Piquet Jr, currently lies twelfth in the standings. Don't write him off just yet - if the Malaysian race is anything to go by, the 2015-2016 Formula E championship is wide open.