In-car telemetry and data logging has long been a preserve of the aftermarket, but not any more 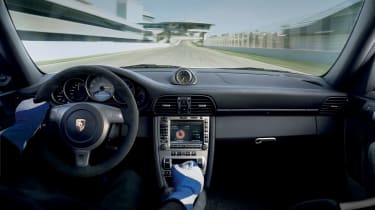 Advances in in-car infotainment have made our driving lives immeasurably easier over the last few decades.

We now have a greater choice of radio stations and internet streaming services. The car recognises our phone as we get in, enabling hands-free calling or playing our favourite music. Satnavs are more accurate than ever, directing us around traffic snarl-ups without any input. And if we really feel the need, we can complain about the glacially slow Honda Jazz in front of us directly to Twitter.

But what if we want in-car technology to serve a higher purpose – making us better, faster drivers, recording our trackday antics or our car’s performance? For taking accurate data for our track testing at evo, nothing other than a VBOX will do, but manufacturers such as McLaren now provide solutions more relevant to ownership, too. This is the modern face of in-car data logging. 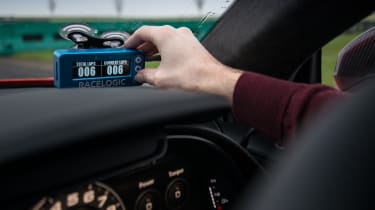 'The most important item in a road tester’s toolkit is the data logger. We use a Racelogic VBOX Lap Timer, which in my experience is the company’s most reliable and intuitive product yet. It doesn’t have a straight-line-performance testing function, so we use a separate device for that, but for circuit activity it gives us an invaluable insight.

'With an antenna attached to the roof of the car, the Lap Timer tracks a pair of satellite constellations to record accurate data. During a track session the predictive lap-timing mode is enormously helpful, because you know corner by corner if your current lap is quicker or slower than the best lap in that session. If it shows a positive figure you know you can bail out of that particular lap to give the brakes a rest; if it shows a negative number you know to keep pushing on.

'Once we’re back in the office we upload the data from the memory card to a laptop and use Racelogic’s own software to deep-dive the results. You can get a pretty good impression from behind the wheel of where one car is quicker than another, but by interrogating the data we can make very detailed, objective comparisons.

'One particular test springs to mind. I could tell that the SEAT Leon Cupra Ultimate Sub8 had monstrously powerful brakes, but I hadn’t realised that they were actually enabling me to brake a full 40m later for a particular corner than in the Honda Civic Type R in evo 215. That’s exactly the sort of insight we rely on data loggers for.' 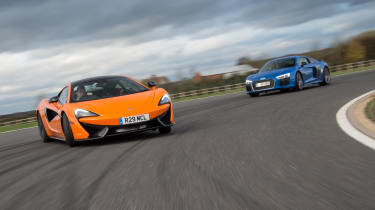 McLaren didn’t introduce the concept of data logging to production cars, but it’s one of the first to provide such a comprehensive solution for owners of certain models it makes, such as the 570S or 675LT.

VDL uses a camera in each bumper to record front and rear images, while one mounted high in the cabin is perfectly placed to catch sloppy steering inputs and panicked corrections. Accompanying data is generated using GPS positioning and timing information, all collated through IRIS.

The MTT information can be viewed in-car via IRIS – allowing for immediate feedback after some tuition – while the VDL footage and accompanying speed, throttle and brake-position and gearshift data can be viewed later on a Windows PC.

Video evidence on YouTube suggests users won’t quite get beautifully high-definition, GoPro-style footage from their recordings, but if anything, this backs up the system’s uses as a training tool, rather than a toy to record heroic moments at your local trackday. As McLaren’s vehicle controls manager, Richard Felton, explains, ‘Customers enjoy driving on track and MTT enables them to analyse and improve their performance in very precise ways.’

There’s enough quality to spot where you’ve missed an apex or braked too early – driving errors easier to appreciate and digest with an instructor in the paddock, or even sitting at home on the sofa, than they are in the heat of the moment on track. According to Felton, owner feedback has been very positive, with genuine lap-time improvements.

The system is still in its early stages, but McLaren is already planning upgrades – including ways of sharing experiences. Expect to see a lot more McLaren onboard videos on the internet over the next few years…