Getting there, parking, what to watch and who to see 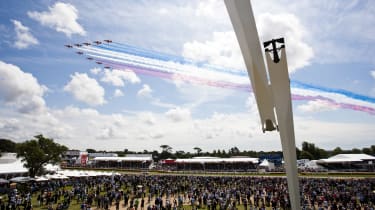 The Goodwood Festival of Speed is almost upon us, bringing with it the opportunity to see just about everything, from supercars to F1 cars, up close.

As seasoned Goodwood veterans, evo has a few tricks and tips that will help you get the most out of the festival. You can read those below, but if you're not able to make the Festival this year, you can watch proceedings from the comfort of your living room on Goodwood's live stream - which you can see above.

Where is the Goodwood Festival of Speed?

The exact address you want to put into your sat nav is Goodwood House, Chichester, West Sussex, PO18 0PX. That'll take you straight to the Festival, but as you get close you'll inevitably have to follow signs to the different car parks. Depending on where you've parked, it can be a bit of a walk before you enter the event proper.

If you're planning on going by train, then there's a regular train from Victoria in London to Chichester. From the station, you'll need to take a bus or a taxi. 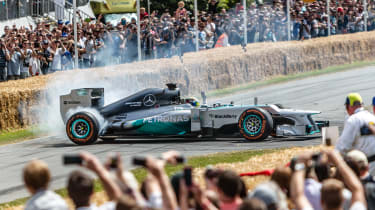 Do consider the fact that there are a lot of people heading to Goodwood nowadays (attendance is capped at 150,000, and it's easy to believe once you're there) and quite simply, the network of country roads around the estate can't cope with the volume of traffic. Queues can be extremely bad, so factor waiting times into your journey.

Goodwood often lucks out with hot weather too (though rain and some storms are forecast this time around) and the location is pretty remote, so if you've got little ones in the car, bring some water and snacks.

What cars are at the Goodwood Festival of Speed?

For starters, you've got a selection of F1 cars from seven different teams. These cars aren't just modern hybrid-era cars either, they date back to when F1 engines actually sounded better than their feeder formulas. Ear plugs might be wise...

This year, the Bugatti Chiron will be making an appearance on the hill climb, fresh from hitting 236mph down the Mulsanne straight at the Le Mans 24 Hours. Love or hate it, it's a car not to miss. There'll also be a large number of BMW bikes and cars as the brand celebrates its centenary this year. 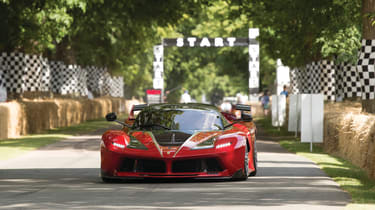 The supercar paddock at Goodwood usually plays host to just about everything you can imagine, from Aventadors to Huayras. You can often see some of the great cars of the past - Audi has announced it'll bring along an Auto Union Type C, for example.

There's also a Concours d'Elegance to explore, while you'll get your fill of motorsport vehicles in the paddock beside the hill climb - everything from rally cars to NASCARs and motorcycle racers. On the other side of the track, opposite the house, are the manufacturer units, so you'll get to see all the latest cars too.

When can I see F1 cars at Goodwood?

Goodwood varies its hillclimb programme daily, so it's worth checking in on the Goodwood website to get an exact idea of what is going on.

The individual categories don't tend to run for very long, so if you're desperate to see something, then don't wander away from the track or you will miss it. 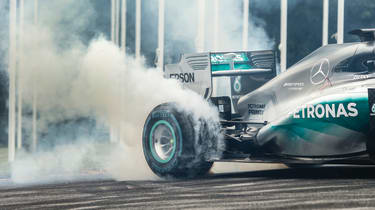 What about rally cars?

Goodwood also has a forest rally stage up at the top of the hill climb. It's quite a walk (comfortable shoes are a must at Goodwood unless you plan to sip champagne in one of the upmarket hospitality enclosures), but the festival runs buses up and down to the stage should you require them.

It's slightly different to the standard hill climb as it's harder to actually see the cars in action, but if you have even a passing interest in off-roading, the selection of vehicles is not to be missed. 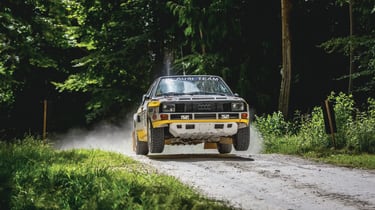 Can I drive cars at Goodwood?

The short answer is yes, you can. Prior to the festival proper, Goodwood hosts the 'moving motorshow'. It takes place on the Thursday and should, in theory, allow you to get behind the wheel of some exciting machinery.

Do bear in mind though that a lot of the more premium manufacturers tend to have spaces reservered for potential buyers, while there are usually age and experience restrictions on the more expensive vehicles. It's also rather busy, so if you're desperate to drive a certain car, you'll want to get to the event as early as possible and get your name down.

Where can I buy tickets for the Goodwood Festival of Speed?

As of now, the Saturday and Sunday at Goodwood are unfortunately sold out. But if you'd like to purchase tickets for Thursday or Friday, there are still limited numbers available. You can purchase them here.