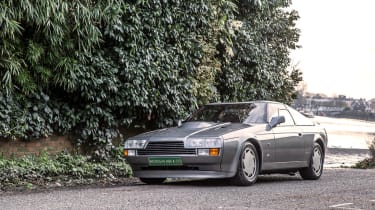 Little – aside from an EU referendum, as it turns out – divides opinion like the work of Italian design house, Zagato.

You’ll struggle to find a coachbuilder whose shapes are loved and loathed to greater extremes, whether it’s the firm’s snub-nosed and boat-tailed remix of the pretty Lancia Fulvia coupe or the brutalist lines of the six-headlight Alfa Romeo SZ.

With a new Aston Martin Vanquish Zagato revealed this week – as part of a 99-car limited run – we decided to revisit one of Aston Martin and Zagato’s previous collaborations, and probably its most controversial.

The V8 Zagato made its debut in 1986 and lasted until 1990. Its smooth lines and flush details suggest Zagato was ahead of the curve in terms of styling – there’s definitely more 1990s in the shape than 1980s – and on the road they have a compact stance unlike that of many other Astons.

As is Zagato’s preference, the body was fashioned from aluminium to reduce weight, and while it’s no flyweight at 1590kg, it’s still a good 200kg or so lighter than the Aston Martin V8 on which it was based. 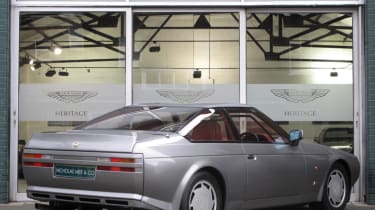 Predictably, with so few cars produced – just 52, two of which were prototypes – they’re now changing hands for considerable sums, and this car for sale at Nicholas Mee in London (via Classic & Performance Car) features a sticker price of £375,000 – not far off the prices Zagatos were attaining during the 1980s supercar boom.

This particular car is number nine (chassis 20018), was sold new in 1986 and exported to Hong Kong in 1987, where it stayed until 2006. Since then it’s been maintained under the same ownership and has covered only 4000 miles.

Given the Zagato’s pleasing size and rust-free aluminium coachwork (for guilt-free all-weather driving) it would seem like a great shame not to add to that tally, so hopefully the eventual owner will see fit to use it as intended.