Tired of the relentless march of technology-assisted performance? 1990s Nissan is here to help... 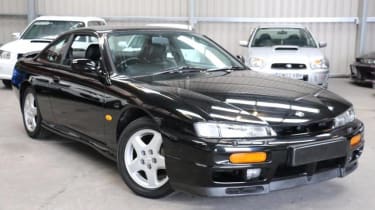 Navigate the front page of evo.co.uk this week and you’ll be bombarded by the technologically advanced – electric record-breaking Corvettes, V12 hypercars, Bugatti’s new showroom and the Porsche Mission E.

Each meriting coverage, of course, but it does make you pine for simpler times, of sweet front-engined, rear drive balance, of manual gearboxes and brawny engines.

Just Looking delivered all that last week in the form of a tidy E34-generation BMW M5 but this week we’ve gone even more down-to-earth with a Nissan 200SX.

Like the BMW, it’s best-known among enthusiasts by its internal model designation, here S14. That distances it from the S15 that followed (and was never officially imported to the UK) and the appealing early 90s curves and pop-up headlights of the S13.

This particular example, on sale with Tom Harvey in London and spotted via Classic and Performance Car, is a 1997 example and as such boasts a facelift that brought welcome aggression to the otherwise indistinct visage of the pre-facelift cars.

They were never rated for their styling back in the day (evo’s predecessors at Performance Car deplored its ‘Japanese blandness’ in December 1995) but today it’s an attractively simple and well-balanced shape. Made nicer still by seeing it in pure, standard form – drifters (of the tyre-smoking rather than vagrant kind) have all but decimated original S14 numbers. 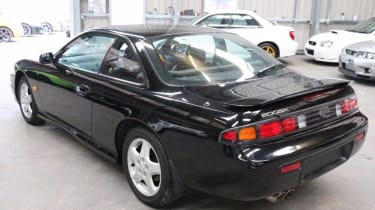 The 200SX has always been great to drive, too. While Performance Car wasn’t keen on the styling, it finished third in a ten-car coupe test in that issue on handling and performance merit. The Nissan tailed an E36 BMW 323i, but was described as ‘right on the BMW’s tail in the desirability stakes.’

Thank the 200bhp, turbocharged four-cylinder for that (the BMW's inline-six made only 170bhp, and 181lb ft of torque to the Nissan's 195lb ft), and its ‘ripping mid-range acceleration’. Its ‘very entertaining’ rear-drive chassis also received commendation. A 6.8-second 0-60mph time is still respectably brisk by modern standards, and the appeal of a small coupe body and manual ‘box is, if anything, stronger than ever.

That’s something Nissan still offers of course, in the form of the 370Z. Given the rising appeal of clean 200SXs the price of this 1997 example, at £8995, would almost get you a tidy, used 370Z (and comfortably get you its 350Z predecessor).

Which raises an interesting conundrum: What exactly would you do with this seemingly pristine, black-on-black, 34,000-mile S14?

We’re not fans of storing cars away never to be used, but at which point does one choose preservation – even of a car with driving pleasure so plainly at its core – over hard use? Answers on a nice, old-tech postcard.

> Find Nissan 200SXs for sale on Classic and Performance Car