With a new Mercedes hypercar on the way, we revisit a previous F1-themed effort 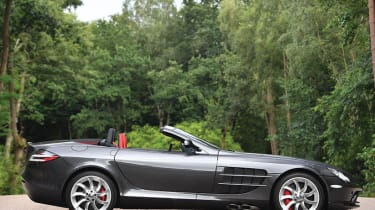 In a week where a source within the Mercedes F1 team confirmed the development of a new hypercar, what better time to look back on one of the brand’s previous range-toppers?

There was an F1 connection back then, too, since the Mercedes-Benz SLR was developed in conjunction with McLaren – making it the brand’s first road car project since the revered McLaren F1.

For some, it could only ever be a disappointing follow-up. Its 5.4-litre supercharged V8 could match neither the theatre of the F1 nor its single-minded engineering purpose. The automatic gearshift was not a manual – that’s enough for some on its own – and the front-engined, rear-drive layout was more GT than supercar.

But then it wasn’t claimed to be anything else, and when the roadster arrived, it added Côte d'Azur boulevard style to the GT mix. So naturally, we took it to the Scottish highlands, in the depths of winter, in evo 127.

Scotland of course was both beautiful and spectacular (as we rediscovered on our last evo Car of the year jaunt), the SLR less so. Plenty of performance and a stiff carbonfibre structure, but also a confidence-sapping chassis and iffy braking feel. 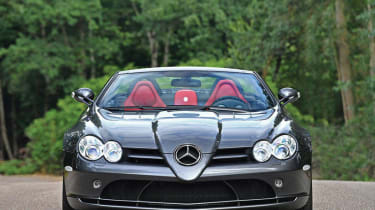 No matter. Today the SLR is less likely to be judged against its peers and more as a unique object. One with striking styling – it’s probably a little easier on the eye today than it was at launch – and ample performance: the Roadster hits 62mph in 3.8sec and goes on to 206mph.

With only 3583km on the clock we doubt the single previous owner took any particularly long trips in this particular car, going up for sale with RM Sotheby’s (via Classic and Performance Car), but as you’d expect from such a car it’s been maintained well and enjoys a recent service.

The dark grey paintwork nestles well with the attractive turbine-blade alloy wheels and the red cabin adds a dash of colour – matched with the red brake calipers.

It’s expected to reach between £290,000 and £375,000 at auction, which puts pricing in the same ballpark it was when new - £324,850. Perhaps this is indicative of buyers struggling to pigeonhole the McMerc just as we did when it was new, since all its contemporary rivals have shot up along with the rest of the market.

Still, an interesting car – and on recent F1 form, a McLaren and Mercedes pairing seems a great deal more attractive than a McLaren and Honda duo…