It's hard to imagine Volkswagen promoting its engineering through a diesel sports car today, but it did just that in 2006 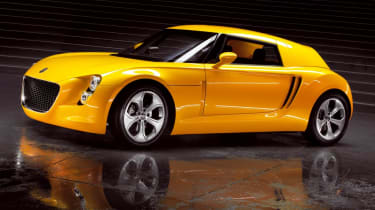 Perhaps in hindsight, the name 'EcoRacer' doesn't now seem as appropriate as it once did. Diesel, and particularly Volkswagen diesels, are no longer seen with such hope as they were a decade ago.

That much can be seen by the Volkswagen concept that stole the headlines at the recent Paris motor show. The Volkswagen I.D. is a safe concept. Golf-sized, friendly styling, humility. Electric power. Autonomous functions.

The VW EcoRacer, revealed at the Tokyo motor show back in 2006, was rather different. Aggressive rather than friendly, outgoing rather than humble, and powered by Volkswagen's golden fuel, diesel.

People were buying TDIs in their droves back in 2006. They still do today, but the emphasis is even more firmly on minimising consumption and emissions (particularly post-'dieselgate'), rather than that tantalising mix of petrol-beating performance and hybrid-beating economy that proponents of diesel engines were so heavily pushing.

The EcoRacer was pretty brisk, thanks more to its carbonfibre construction and 850kg kerb weight than the 134bhp 1.5-litre diesel it packed amidships. 0-62mph took 6.3 seconds. No, it really did; the EcoRacer was a working prototype rather than a glitzy ornament destined to rotate on a turntable looking pretty in pictures. 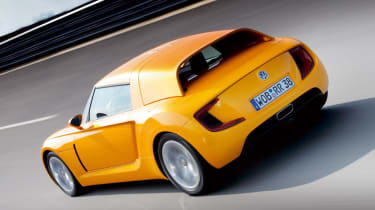 The other benefit of the low weight and compact diesel motor was of course economy, and an average figure of 83mpg certainly wouldn't look shabby today, particularly in a car with the performance to comfortably out-sprint a Mazda MX-5, the car the EcoRacer would surely have targeted in the market.

There were other tricks, of course. The EcoRacer's roof was particularly adaptable, transforming from a full coupe (with a profile that people would probably call a shooting brake today, even if it's nothing of the sort), to a targa-roofed sportster, to a full speedster with a flyscreen and roll hoop.

The cabin is quite prescient of modern trends, with a minimalist look that ditches most traditional dashboard architecture, and even eschews a central display for an all-encompassing setup within the main instrument pod - it isn't hard to see it as a forerunner of Audi's Virtual Cockpit.

An EcoRacer today would doubtless look very different. Electric power is now VW's buzzword and it's hard to imagine any kind of sports car being the figurehead for the firm's upcoming technology. Not least because sports cars represent an ever-decreasing market, but it's likely environmental friendliness and ease of use will take precedence over fun while VW rebuilds its tarnished reputation.