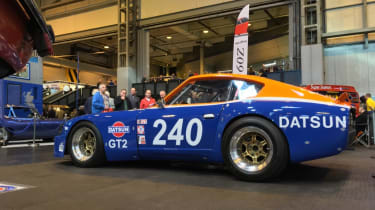 The halls may be gloomy, the displays crowded and the parking charges nearly enough to make a down-payment on a 911, but the annual Classic Motor Show at the NEC is always a highlight for those who get their driving thrills from older vehicles.

Whether the pristine metal up for sale with Silverstone Auctions or more humble branches of the automotive spectrum - think Iron Curtain offerings or the similarly austere output of 1970s British Leyland - there's something for almost everyone.

As ever, a few cars in particular stood out from an evo perspective. Japanese cars were once shunned by the classic vehicle community but they're becoming increasingly attractive to those in the know, and old S30-chassis Nissans - the 240Z, 260Z and 280Z - are right at the forefront of that. 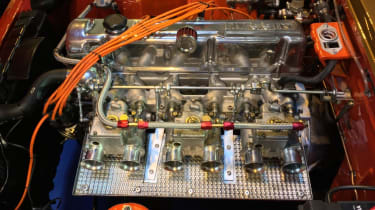 There were three 240Z "Super Samurai" specials at the NEC, one for sale with Silverstone Auctions and two more on the Datsun stand - along with a wide-arched 240Z GT2.

Also wide of arch was another of our favourites - a Hyundai Accent WRC. Campaigned between 2000 and 2003 by drivers such as Juha Kankkunen and Kenneth Eriksson, the Accent never scored a WRC victory but it remains a fantastic-looking competition vehicle.

Along with the Datsun, the Silverstone Auctions enclosure held several automotive gems, many of which we covered in our auction preview. The Ferrari Owners Club stand was also a highlight, with several race-prepared mid-engined V8 models on display - including a 308 GTB4, an F355 and a purposeful-looking 328 GTB.

Over at Porsche, pristine condition was the order of the day, with a strong focus on the marque's front-engined models. The 924 is finally getting the recognition it deserves after many years of "poor man's Porsche" jibes, and immaculately-restored examples of the 924 and later 924S suggest it's only a matter of time before prices head steeply upwards. 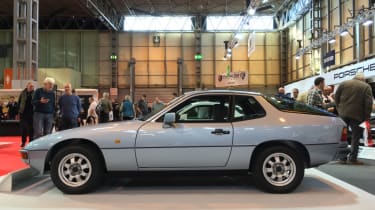 Hopefully that won't mean these cars will be hidden away. Though with one prestige car sales firm putting "This car has investment potential" stickers in the windows of all its vehicles - however likely or unlikely they are to rise in value - perhaps that's wishful thinking.

Another of our show highlights was a car that was never officially sold in the UK. The Volkswagen SP2 was built using aircooled VW mechanicals in, and for, the Brazilian market. Rare, but compact and crisply-styled, it's effectively the budget 911 we were never offered.

Click through our gallery above to see some of our other favourites from the show, both performance cars and otherwise.

> Find classic cars for sale at Classic and Performance Car