A window into the incredible mechanicals of one Maranello's greats 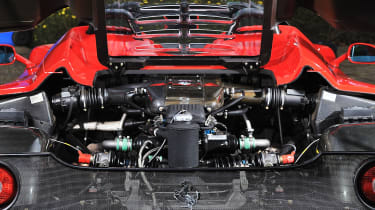 The scene is Maranello, it’s the mid-nineties. Ferrari is introducing its most potent supercar to date as 49-year-old test driver Dario Benuzzi explains to journalists that this swooping, cab-forward demon is closer to a single-seater than any road-ready car ever to bear Scuderia shields. F1 triple-champ Niki Lauda is on hand to eagerly declare that even the sacrosanct F40 doesn’t stand comparison when the two are driven around the Fiorano test track.

Fast-forward two decades and if it’s possible to pity a performance car, the Ferrari F50 is probably it. Quicker than its forebear and purer than an Enzo, it’s a wonder how the exceptional machine that bridged those untouchables is quietly smeared because of some befuddled styling and supposedly underwhelming performance. If you can call 0-62mph in 3.7sec and 202mph underwhelming…

Truth is, what the F50 lacked in visual coherence it more than made up for in mechanical razzmatazz, and bereft of a key you have two visual entry points to the fabulous viscera between the firewall and the prodigious Group-C-style wing. The obvious approach is to gently lean over a carbonfibre haunch and peer through the Perspex engine cover for a bird’s-eye view par excellence. Because of rippling louvres in the plastic, big buttresses and the sheer width of the bodywork, however, this is an awkward procedure. More sagacious is to take a knee between the venturi tunnels. Actually, take two, you’ll be there a while.

Do this behind a McLaren F1 or even the quad-turbo Bugatti EB110 and you’ll get a face-full of black polymer, the only boon perhaps a glimpse of resonator here or gearbox casing there. Addressing the F50’s rear bodywork, meanwhile, yields one of the definitive X-rated spectacles of the four-wheeled world. The cavernous engine bay is about as good as it gets, and the pinprick effect of looking through arguably the most hallowed chicken wire in history only kindles curiosity further.

Inside, the naturally aspirated 4698cc, 60-valve V12 shared the same widened 65-degree vee as Alain Prost’s 614/2 1990 F1 ride. More compact than Ferrari’s other road-going V12s, it was rigidly fixed to the chassis for explicit handling, developed 513bhp at 8500rpm and reportedly requires a top-end rebuild after just 25,000 miles. Between you and its colossal carbon plenum is a six-speed transmission encased in aluminium, partially bolted to which is spectacularly gratuitous pushrod suspension. That all the ancillaries are mounted low to improve airflow out means that everything is on display in captivating clarity.

There is of course more at work here than sheer show business – the effective open-working of the F50’s derrière was a simple and lightweight solution to reduce catastrophic overheating. One suspects, though, that in employing a mesh there was an element of flaunting what you have. And why the hell not?