Ahead of the 1000km of Silverstone, we interview Peugeot LMS racing driver Anthony Davidson 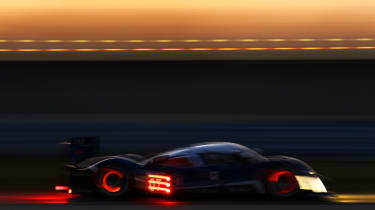 September 10 to 12 2010 sees Le Mans Series hit Silverstone for its season finale. And it's a biggie, a 1000km, 170-lap race which takes place on Sunday September 12. We caught up with Peugeot LMS works driver Anthony Davidson, who'll be piloting one of the French firm's diesel 908s.

Are you looking forward to racing on home turf, and trying out Silverstone’s new layout?

I’m really looking forward to racing again, I’ve had a bit of a break. But yes, racing on home soil is great.  I’ve tried the new layout on simulators, but it can never give the same experience as racing there properly, in my 908!

It didn’t take Formula 1 long to get to grips with it though, so it shouldn’t take us long. Wet or dry I really can’t wait to get going: it’s going to be like a mini Le Mans, with the Peugeot v Audi battle reignited!

We are going to Silverstone to win outright. Nothing else is good enough, and we’re fully geared up to do that.

And how have you been preparing? Does a long distance race – such as Le Mans or this 1000km race – involve much planning beforehand?

I’ve adapted my training to much longer distances. Trying to keep my neck in shape is important, especially around high speed (hence high G) circuits like Silverstone. We’re only about 10-12 seconds slower than an F1 car there, so it’s quick.

You’ve raced in F1. How does it, and its cars, compare to LMS sports car racing?

The cars are actually very similar at high speed, with similar downforce. In slow speed corners you really feel the weight difference, though: an LMS car weighs around 900kg compared to an F1 car’s 600kg, so the 908 just isn’t as nimble.

You’re also waiting until it’s wound up enough to enjoy the downforce. It’s nervous at high speed too, just like a Formula 1 car. Their power figures are very comparable, though you really feel the torque of the 908 diesel after a high-revving F1 car. That’s a substantial difference.

It can catch you out driving a diesel initially. You hardly hear it at first; you barely hear the engine note on downchanging, and often need to check the display when changing down, especially if there’s a lot of tyre noise.

The traction control can make things laggy as well, the turbo spinning up the wheels in wet conditions or on cold tyres.

In a sports car everything happens a little slower; it’s not quite as driveable as an F1 car. It’s still a beast but the overall experience is a bit less brutal, as you’d expect for something you’re supposed to spend 24 hours in.

Do you spend 24 hours flat out? Or are there reliability-based tactics?

We’re flat out every lap if we’re fighting, but might ease off a little if enjoying a long lead. Generally we’re going 90-100 per cent all the time. The car should be built to last the distance. The competition is so strong from other teams and our own team members that I push all the time; the key is not making mistakes when going so hard. In a long-distance race I view each of my stints as a mini Grand Prix.

So there’s a lot of in-team competition, then?

Between us and other cars in the team, yes. It is still a team affair, though – was very gutted when teammates failed at Le Mans, you live it all with the whole team, though it’s a little family especially with the guys you work with in your own car. It’s all much more of a team affair than F1.

At something like Le Mans or the 12 hours of Sebring it’s actually more nerve-wracking out of the car than in it, glued to monitors and screens as fellow drivers do their stints.

Sounds like you’re enjoying it. Is sports car racing where you see yourself staying?

I love what I’m doing at the moment. As soon as I left F1 it’s what I targeted, the Peugeot 908 especially. As a racing driver you always strive to be in the fastest car. These sports cars really suit my style, too.

My mind is focused on winning Le Mans; I’m stronger and more hungry to win it than ever. That’s my dream now, and I’ll be here as long as it takes.