Want to own a slice of film history? The 250 GT California used in Ferris Bueller's Day Off is being auctionned. 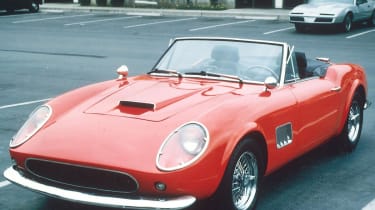 A replica Ferrari 250GT California Spyder that was used in cult film Ferris Bueller’s Day Off is to go under the hammer as part of Bonhams Collectors’ Motor Cars and Automobilia auction.

Of the two replicas made for filming this is the only one to survive, the other having been destroyed for one of the films later scenes. Paramount Pictures took the decision to commission the replicas due to the scarcity and cost of a genuine California Spyder. Built by Modena Design and Development of El Cajon, California, it’s identical on the surface to the genuine article, but runs a 4.7-litre Ford V8 and automatic gearbox sat within a bespoke multi-tube spaceframe chassis. Featuring independent front suspension, a live rear axle and disc/drum front/rear brakes, the glassfibre body incorporates a steel cowl brace, steel door inners and a steel boot lid.

The auction is due to take place at 11am on 19th April at the Hendon RAF museum. To see the full list of metal up for auction at the event, click here.