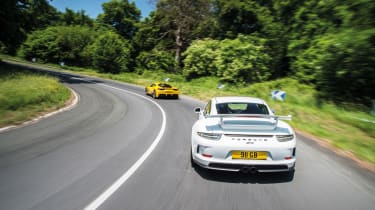 As the wide, low and insectile LMP1 cars fight for outright victory at Le Mans, it can sometimes be easy to forget the connection between these machines and the performance cars that we drive on the road. But the likes of the Audi R18 e-tron quattro, Porsche 919 Hybrid and their predecessors act as rolling test-beds for all kinds of technology that we can benefit from. ABS, traction control systems, fuel management, twin-clutch gearboxes, tyre compounds – all are, or were, developed and tested to some degree on the Circuit de la Sarthe.

The cars we’re guiding across northern France to the 2015 race – the Porsche 911 GT3 and Ferrari 458 Speciale – rank amongst the ultimate road-going models to benefit from such race-bred tech. The PDK gearbox in the GT3, for example, can trace its bloodline back to the PDK transmission that appeared on a Porsche 962 at Le Mans way back in 1988. Both the road cars, meanwhile, wear Michelin Pilot Sport Cup 2 tyres. Direct descendents from the company’s racing activities at Le Mans, they feature a twin-compound construction – the outer section made from a ‘high molecular chain’ elastomer to maximise grip in corners, the inner section using a more rigid elastomer that promises more precise steering. 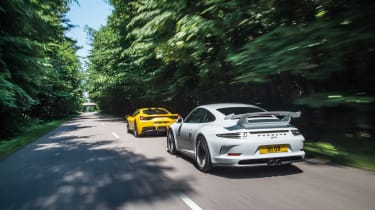 Of course, you don’t need a supercar to use Cup 2 tyres, or to experience a dual-clutch gearbox, but there’s another reason why we chose this particular pairing: the 911 GT3 and 458 Speciale are donor cars for the 911 RSR and 458 Italia GTE that compete in the ‘Grand Touring Endurance’ (GTE) category at the Le Mans 24 Hours, continuing a generations-old rivalry between the two marques.

The appeal of the GTE class is simple, if a little fanciful: drive the 260 miles across France to Le Mans in your stripped-out sports car, cheer on its racing cousins for 24 hours, then drive home again. But for the profoundly disappointing fact that these cars are very much borrowed, that’s just what we’re doing this weekend.

With the Speciale’s almost unbearably serrated exhaust bark pinging off the GT3’s upright windscreen an hour or so from Le Mans, it occurs to me just how much these two road racers have in common. Their naturally aspirated engines both rev to 9000rpm, crashing over the final 1000 revs with such force and intensity that you fight the urge to shift up early. Those shifts bang in as quickly as you can flex the fingers on your right hand in both cars. Furthermore, both have face-bending carbon-ceramic brakes and chuck out unnecessary luxuries to save weight. Even more significantly for this magazine, however, is that both have been crowned evo Car of the Year winners. They’ll rank alongside the all-time performance car greats for generations. 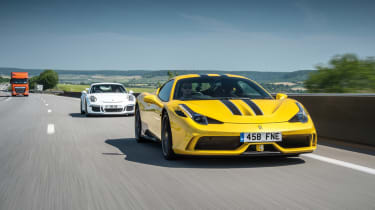 Trading the 911’s upright bucket seat for the 458’s firmly stuffed sports seat, it’s clear that there are also significant differences between these cars. Whereas the Porsche’s steering returns a very calm, almost languid rate of response at the front axle, the Ferrari’s helm is electrifying in the way it adjusts the car’s trajectory. It’s tricky to arrive at a preference between the two, but after a few miles in each car you soon reach the slightly paradoxical conclusion that both systems are near-perfect.

While the GT3 retains some semblance of day-to-day usability, the Speciale clearly sets out its stall as a high days and holidays machine. Not for the screaming Ferrari the needless distraction of a stereo or satellite navigation – on the final dash towards Le Mans, this ‘Giallo Modena’ 458 feels all the more dramatic for it.

But both cars are nothing less than spectacular to drive. As we eventually pull up to the circuit entrance, drawing open mouths and longing stares from onlookers, it dawns on me that I’ll probably never travel to Le Mans in a more enthralling brace of cars.

In forthcoming weeks both cars will be superseded – the GT3 by an even more focused GT3 RS and the Speciale by the blown 488 GTB. This round is probably best judged as a dead heat, but Porsche and Ferrari will continue their most romantic of rivalries for years to come, both on the road and at Le Mans.