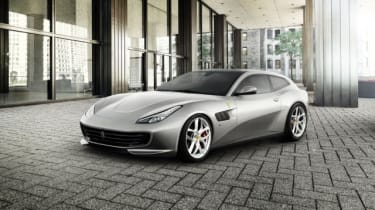 The Ferrari GTC4Lusso T, which made its debut at the Paris Motor Show last month, is now available in the UK.

Ferrari has now announced official pricing for the car, which starts at approximately £30,000 less than its bigger brother, the V12-engined GTC4Lusso.

The Lusso T's on-the-road price is quoted as £199,285, with the V12 currently starting at £230,430. A huge range of options is then available on top of that price, from the usual £1056 Scuderia Ferrari shield badges for the front wings, to more significant alterations like a panoramic glass roof for £11,520.

Stretch beyond the standard options list and Ferrari's Tailor Made programme can allow you to personalise your car to the nth degree - something evo experienced first hand on a visit to Maranello earlier this year. Want to trim your entire interior in denim? You got it, however much we'd suggest you don't. 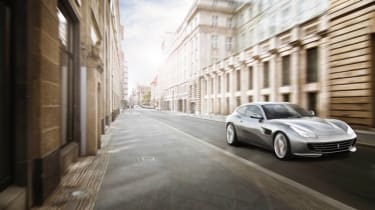 This latest addition to the model line is fitted with the twin-turbocharged, 4.0-litre V8 engine from the California T. However, unlike its V12-engined, four-wheel drive equivalent, the Lusso T will only be available with rear-wheel drive, with power sent to the rear axle via a seven-speed dual clutch gearbox.

While it may share the California’s V8 engine, Ferrari’s engineers have massaged its performance further still, with peak power climbing from 552bhp at 7500rpm to 602bhp at the same crank speed. Torque also climbs from 557lb ft  at 4750rpm to 650lb ft between 3000rpm and a 5250rpm. For comparison, the V12  GTC4Lusso produces 680bhp and 514lb ft.

Beneath the Lusso’s body the electronic chassis aids have been recalibrated, with the four-wheel steering integrated with Slide Slip Control 3 to provide quicker steering responses in and a out of the corner due to the rear wheels steering in the same direction as the chassis. 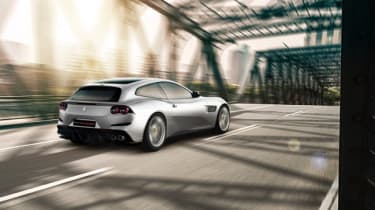 Ferrari has also worked on its variable boost management system with the aim of keeping turbo lag to a minimum. To this end, the variable torque curves between third and seventh gear have been managed to remain as consistent and linear as possible.

On the styling front, the GTC4Lusso T follows in the tracks of the V12 with the distinctive shooting brake design remaining largely untouched aside from a few pieces of bespoke trim. Inside the four-seat layout remains and incorporates Ferrari’s latest 10.25” HD screen and infotainment system.

Produced mainly for the Chinese market, where the country’s consumption tax for vehicles with engines between 3.0- and 4.0-litres is set at 25%, and anything above that at 40%, Ferrari is hoping its first model line to be offered with two engine options will broaden the GT’s appeal. But we also think Europe will take to a cheaper, more cost effective four-seat Ferrari too. And while Ferrari has yet to confirm a price, it has said the V8 engined model will cost in the region of 10% less than the £230,000 V12 model.

No electric power for GT4CLusso

The new V8 twin-turbocharged GT4C Lusso is rear wheel drive only, unlike the four-wheel drive V12 GT4C Lusso that features the company’s innovative 4RM EVO four-wheel drive system, which includes the front-mounted PTU taking direct drive from the crank at the front of the engine before splitting it between the two front wheels. 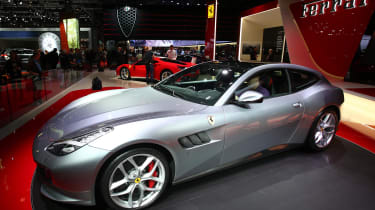 By removing the PTU Ferrari’s engineers have freed up space within the GT4C Lusso frontal area, but currently it has no plans to utilise the space by installing an electric motor and offer the first Ferrai hybrid.

“Technically, yes, we could do this” said a spokesman at the Paris Motor Show. “But at the moment the current PTU is much smaller than the electric motor that would be required to produce the GT4C with (any) useful electric power.

“There is no room on this platform for the (electric) motor and we have no room for storing the batteries. So we have no plan to do this.”